For every four elementary teacher candidates, only two will demonstrate a reasonable grasp of the content they will teach. The two who do not likely spent as much time and paid the same tuition — and may have earned the same grades — yet are barred from earning a standard teaching license by a lack of content knowledge. The problem is not that relevant content courses do not exist, but rather that they are not required and are instead presented as options to students with equal priority alongside less useful niche courses. 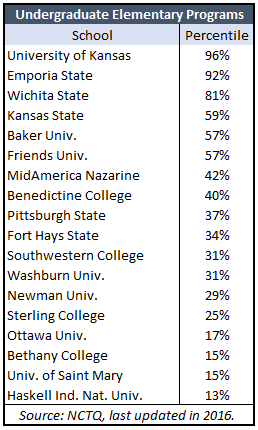 That’s the conclusion of a recent study by the National Council on Teacher Quality (NCTQ), which also rates university teacher prep programs on how well they’re preparing teachers to work in the classroom.

The NCTQ study found that, on average, two-thirds of core elementary topics are missing from the graduation requirements in Kansas. Hannah Putnam, the director of research for the National Council on Teacher Quality, says diagnostic testing of teaching students can have long term benefits for school children, but that universities are not requiring future teachers to know elementary topics.

“For example we found that only three of the 18 programs has a requirement for a biology class with relevance for elementary school teachers,” says Putnam. “Only 3 of the 18 require a chemistry class.”

A key problem with the issue the study covers is the balance between content knowledge and pedagogy, which focuses on the method and practice of teaching. Daniel Bergman as associate professor of curriculum and instruction at WSU notes the study brings up an old issue regarding training teachers.

“Do you get future teachers prepared with content, or do you emphasize actual strategy or pedagogies of how do you actually work as an instructor and manage a class room,” says Bergman. “Most of us agree that both are important, but a lot of times there is one of this more than the other.”

Putnam notes that the study found graduation requirement in topics are too broad to potentially be applicable to elementary classrooms. For example a history requirement could be fulfilled through a basic U.S. history or a more niche class like history of fashion that will never see a third grade classroom.

“[For] those programs that don’t have adequate content it may mean they simply don’t have any courses required. Or it could mean that they are giving candidates options that are actually not hitting the mark for what elementary teachers need,” says Putnam.

Bergman take issue with the study’s assessment of WSU students noting that WSU has created multiple content courses tailored for future students. Bergman feels this run counter to what the study said.

“It reports WSU does not align with the areas of composition and literature, which may be due to not meeting one or more of the NCTQ’s prescribed criteria,” says Bergman.

However, Putnam notes that four out of five teacher prep programs nationwide already have relevant course offered, but are not requiring them for elementary teaching students. 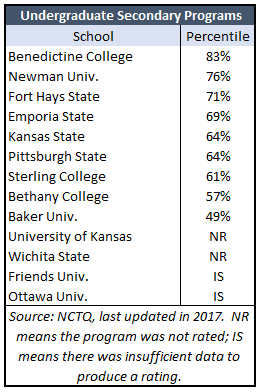 “It’s great to learn how to teach math, we think that’s really important…but if you don’t have a firm understanding of the math itself knowing a few teaching techniques is not going to help,” says Putnam.

No Kansas secondary education teacher prep program ranks in the top ten percentile nationally. Among the programs rated in 2016, Benedictine College did the best at 83 percent, followed by Newman University at 76 percent, Emporia State at 69 percent, Kansas State and Pittsburg State at 64 percent, Sterling College at 61 percent, Bethany College at 57 percent and Baker University at 49 percent. Programs at the University of Kansas and Wichita State were not rated, and there was insufficient data to rank the programs at Friends and Ottawa universities.