The University of Kansas issued a press release on Monday, quoting a study in the Journal of the American Medical Association (JAMA) by KU professors Dr. Donna Ginther and Dr. Carlos Zambrana, which declares that mask mandates work.  Not masks, mind you, mask mandates.  But just as Dr. Ginther did last October, the presentation of the data is skewed to give the impression that mandates work; the same data viewed differently shows a dramatically different picture. 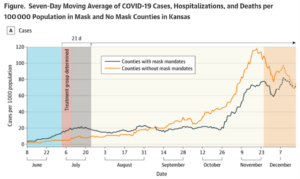 This presentation certainly gives the impression that there are a lot more cases in counties that didn’t adopt mask mandates.  But that approach is very misleading because it obscures total case growth and doesn’t show the compounding effect of daily changes.

Chart 1 tracks new weekly COVID-19 cases for the same counties.  It isn’t exactly the same because the KU researchers had access to daily data and we had to use weekly data, but the trends look quite similar.  It appears that the counties without mandates surpassed the mandate counties in early September and have since seen more cases.

Chart 2 uses the same data and county groupings but shows the cumulative effect of new weekly cases. Both Chart 1 and Chart 2 show that cases grew faster in mandate counties through the end of August, and while the narrowing of the gap shows that cases have grown faster in the other counties since then, the mandated counties still had more cumulative new weekly cases for the week ended October 19.  The counties with mandates added 2,083 cases per 100,000 population compared to 2,062 cases for the counties that rejected the governor’s mandate.

Many counties that hadn’t enacted mandates gradually went along with Kelly’s October order. Some adopted mandates in October and many more did so in November, but 35 counties never adopted mask mandates according to a list in the KU JAMA study.

KU researchers limited their sample to 15 counties that always had a mask mandate as of July 10, 2020, and 68 counties that had no mandate (no mask) as of October 31, 2020.  They excluded 22 counties representing about a third of the state’s population, including six counties that adopted mandates between July 15 and July 24 – Clay, Cowley, Pratt, Reno, Rice, Sedgwick, and Stanton.

The City of Wichita, which accounts for about 75% of the Sedgwick County population, adopted a mask mandate on July 3 last year, but the KU researchers still excluded Sedgwick County from their study.

A longer-term comparison of the 35 counties that never had a mandate with 21 mandate counties (15 counties used by the KU researchers and the six that adopted mandates in July 2020) shows no appreciable difference between the two groups.

Overall, there is very little difference between the two groups, and certainly, nothing that proves mandates are effective.

Additional issues with the KU study

Ginther’s study released in October had 21 counties with mask mandates but her latest report counts only 15; most of the difference this time is from excluding counties that adopted mandates in July.  The earlier report counted Pratt, Reno, Sedgwick, and Stanton counties as having mandates.

The new report appears to include an inaccurate presumption that was in the earlier study.  As explained in our October story, they did what is called a “difference in difference” analysis, meaning they based their analysis on an assumption no Kansans wore a mask before Kelly’s mandate order and 100% of Kansans wore a mask afterward.

But that isn’t the case.  Surveys by the New York Times and Fort Hays State University found very high incidences of people wearing masks in counties without mandates; they also found that some people in mandate counties never or only occasionally wore masks.

It bears repeating that this critique of the latest KU study is not about whether masks are effective; there is just no evidence to support the claim that mask mandates are effective.