Kansas ranks near the bottom of real personal income growth

A report last week from the Bureau of Economic Analysis shows Kansas ranks near the bottom of states in real (inflation-adjusted) personal income growth for the third quarter of 2020 compared to a year ago.

Kansas was 48th in total personal income change, with growth of 2.61%; only North Dakota and Wyoming did worse.

Personal current transfer payments, defined as “payments to persons for which no current services are performed” (like stimulus payments and unemployment) had a significant impact that more than offset declines in other income categories for many states, including Kansas. 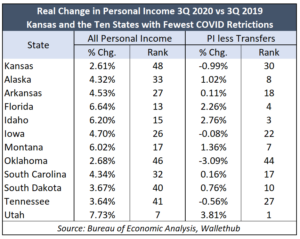 Excluding transfer payments, personal income declined by 0.99% in Kansas; that performance ranked #30 among the states.

Only 20 states had positive net growth, and seven of those states had the least COVID restrictions, according to Wallethub.  Five of the top 10 states are among Wallethub’s least restrictive states.

The ten least-restrictive states collectively had real net-of-transfer growth of 1.11%, while the other 40 states declined by 0.9%.

“States with few to little restrictions in 2020 consistently out-performed their peers while having similar or fewer COVID cases,” Michael Austin, director of the Sandlian Center for Entrepreneurial Government — which, like the Sentinel, is owned by Kansas Policy Institute — said. “The latest state personal income statistics reinforce that the best recovery from the COVID pandemic was for the government to step out of the way and avoid lockdowns and restrictions.”

Meanwhile, as Kansans struggle to even get unemployment benefits, a Stanford study has shown no real effect on COVID via massive restrictions, as the Sentinel reported.

The authors conclude, “While small benefits cannot be excluded, we do not find significant benefits on case growth of more restrictive NPIs. Similar reductions in case growth may be achievable with less restrictive interventions.”

Early this year, United Van Lines’ annual migration study found Kansas was the sixth most moved out of state in the nation.

Kansas and California were essentially tied 59% of moves leaving the state.

According to the study, which tracks the company’s exclusive data for customers’ 2020 state-to-state migration patterns, Idaho was the state with the highest percentage of inbound migration (70%) among states experiencing more than 250 moves with United Van Lines for the second consecutive year. Topping the list of outbound locations was New Jersey (70% outbound), which has held the spot for the past three years.