Adrienne Vallejo Foster, who is running against U.S. Rep. Sharice Davids, (D-Kansas) for the 3rd House District, said in a phone interview Saturday she has been helping the operators of these nail salons try to navigate the largely broken Kansas unemployment system, and try to apply for Paycheck Protection Loans since Governor Laura Kelly closed the state in early March.

However, many of the salons didn’t make the first cut of loans before the PPP program initially ran out of money.

“So they do have a $16,000 property tax assessment coming due,” Foster said. “They’re stressed out because no cash is coming through.”

Even more troubling, many of the employees of these salons are 1099 employees — independent contractors.

Foster used, as an example, one salon with 52 employees where nearly half are contractors and were denied unemployment benefits — despite the fact that a part of the CARES act was the Pandemic Unemployment Assistance Program, which was specifically designed for 1099 employees and gig workers.

“All of the 1099 [workers] have been denied unemployment, even though they were eligible,” Foster said, adding at one point she sat on a conference call for four hours with a salon owner waiting to talk to someone at the Kansas Department of Labor, only to be told the representative who picked up the phone had no answers.”

The KDOL Facebook page now says the PUA program will be available for applications on May 12, some six weeks since gubernatorial fiat put most gig workers out of business. However when applicants can expect to be approved or when they might actually begin to see money is unclear. Indeed, despite KDOL social media being updated on May 5, the website continues to say the program is not operational, and that the earliest claimants could expect to see a check is May 25.

Because neither the state nor the Kansas Board of Cosmetology had deigned to create a set of best practices to allow barbershops, hair and nail salons and tattoo parlors to open, Foster reached out and found a set of practices that Georgia is using, and helped the salon owners apply to the state under the Kansas Essential Functions Framework to get the stores — and more than 10,000 beauty workers across the state back to work. An appeal was also sent to the Johnson County Board of Health.

“I also told them, the best way to do it is without government intervention,” Foster said. “So let’s just do it on our own.”

One large salon owner, at her own expense according to Foster, put plexiglass barriers between each pedicure and nail station and added a new air filtration system — in a building she doesn’t even own.

What it comes down to, she said, is that businesses in Johnson County and across the state have been very compliant with the health orders, but with “Phase 2” of the reopening plan not set to begin before May 18 — and no guarantee that it will begin then — many salons simply will not survive. Foster said many small business owners are simply “done” with being told they must sit idle while their life’s work fades away.

“When I say ‘we’re done,’ I spoke with eight businesses on a zoom meeting (Friday) and they’re like ‘this is ridiculous,'” Foster said, adding business owners and individuals are perfectly capable of deciding for themselves the level of risk they’re willing to tolerate.

“Before you know it, the government’s going to tell us when we need to go to bed and when to wake up — because they’re surely telling us when we go to work and when we can’t.

Even if phase two opens on time, there’s no guarantee that Johnson County will allow the beauty industry to return to work, as Lemaster’s guidelines remain much stricter than the governor’s, despite the fact that far less than one percent of the county is confirmed to be infected. As of May 8, only 0.10% of the more than 600,000 residents are infected.  Ford County’s infection rate of 3.05% is more than 30 times greater than that of Johnson County, but Ford County didn’t extend the Governor’s order as LeMaster did in Johnson County.

Johnson County Commissioner Mike Brown said via text Saturday that this is part and parcel of a response that has been botched from the get-go.

Brown said that, while he does believe COVID-19 is neither a joke nor a hoax, Kansas isn’t New York City.

“The Midwest is nowhere near the concentration of people in our major American cities,” Brown said. “Johnson County and the entire State of Kansas have gone about this process completely backward; the managed and long term care facilities should have been isolated from the beginning and then people and businesses wouldn’t be in the untenable position they are now.”

Kansas is facing upwards of a $1 billion budget deficit according to best-case predictions and some economists are predicting an impact in excess of $2 billion over the next two years — largely due to the economic shutdown.

“A balanced approach could — and should — have been utilized versus the overly heavy-handed approach businesses are suffering through now.”

While not directly addressing Lemaster’s stringent order — although he did oppose it and made a motion at a recent meeting to reopen Johnson County on May 4 — Brown said business owners have every reason to make sure their premises are safe for customers.

“A business owner has the highest interest in utilizing best practices in these times,” he said. “A business owner who has poured their soul into a business literally has everything to lose if it goes poorly and will actually go the extra mile just to be sure — and that is more gravity, curb, and deterrent than any goofy government rule or penalty could ever hope to apply.”

Who is Dr. Joseph LeMaster?

LeMaster is currently a family medicine researcher at the Kansas University School of Medicine in Kansas City, Kansas, as well as the Johnson County health officer as a contract worker.  LeMaster was paid $42,787 by Johnson County last year, according to an Open Records request submitted to the county.

LeMaster is eminently qualified for the position, holding not just an MD from KUMed, but a master’s of public health from Washington University and a master of science degree in public health in developing countries from the London School of Hygiene and Tropical Medicine. 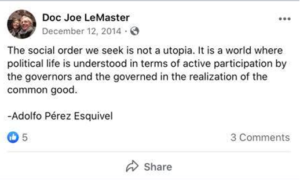 LeMaster also, however, appears to embrace far-left views as well. In a since-deleted set of social media posts — screenshots of which the Sentinel has obtained — he expressed support for socialist presidential candidate Bernie Sanders and posted a quote from Argentinian leftist community organizer Adolfo Perez Esquivel — who famously accused the United States of “economic terrorism” in the wake of the Sept. 11, 2001, terrorist attacks.

The Sentinel last week reached out individually to each member of the Johnson County Commission, asking why they felt the need for more restrictive guidelines than Sedgwick County — which contains the state’s most populous city — and their comfort level at having someone with far-left views in a position of such authority. 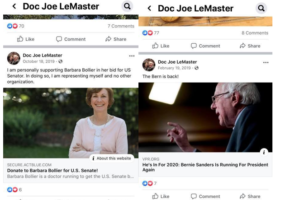 Rather than respond individually, the Sentinel received a reply from Director of Public Affairs Jody Hanson — attributable to the county government, rather than Hanson.

“Balancing public health and economic recovery is extremely challenging for every government entity right now,” the statement read in part. “Johnson County has, and will, always put public health first.

“The decision-making process to extend Johnson County’s Stay-at-Home order was focused on maintaining the benefits of all that has been accomplished in terms of the progress our community has made in reducing the spread of COVID-19 transmission. Johnson County has experienced positive outcomes in its case counts and other data. However, neighboring counties have not had the same positive outcomes.”

“Our goal is to be aligned with our neighbors as much as we can to avoid increasing COVID-19 transmission,” the statement read. “We also wanted to provide local businesses ample time to prepare for reopening.”