Government proponents of mask mandates say they’re driven by data, but the Occupational Safety and Health Administration (OSHA) says cloth and surgical masks “will not protect the wearer against airborne transmissible infectious agents due to loose fit and lack of seal or inadequate filtration.”

Johnson County Public Health Officer Dr. Joseph LeMaster told commissioners last week that masks will save lives, but when pressed for an estimate by Commissioner Mike Brown, he demurred.

Brown asked, “How many people will not die as a result of that (mandate) in Johnson County?”

“That is a number I do not know, Commissioner,” replied LeMaster.

LeMaster emphatically said more people will die without a mask mandate, but if true, that begs the question – why didn’t Dr. LeMaster and Governor Kelly issue mask mandates at the beginning of the pandemic?  Put differently, why now?

KDHE reports only 10 new deaths for the seven days ended July 6, which is the second-lowest number of new deaths reported since the beginning of April.  The rolling mortality rate (total deaths divided by total cases) set a new record low today of 1.7%. 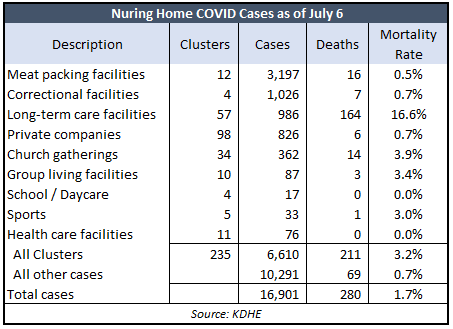 Nursing homes haven’t allowed visitors throughout the pandemic, so a public mask mandate has no impact on that vulnerable group.

The 235 clusters identified by KDHE account for 39% of cases in Kansas and 75% of the deaths.  The mortality rate outside of nursing homes and clusters overall fell to 0.7% as of July 6, which is another record.

Nine of the ten new deaths reported over the last seven days occurred in nursing homes.

On June 22, The Sentinel submitted an Open Records request to KDHE for historic weekly data by county for new hospitalizations and deaths, but it still hasn’t been provided.

COVID by the numbers in Kansas

The majority of new cases reported last week in Kansas were concentrated in five counties.  Johnson County reported 627 new cases, but the infection rate is still less than one-half of one percent of the population and new hospitalizations are holding steady at 7 per week since the end of May. 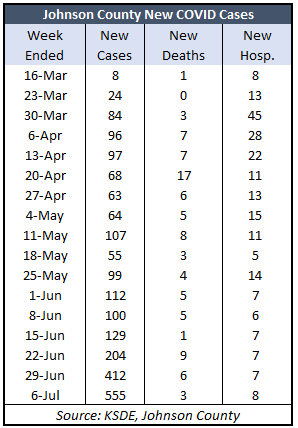 That Johnson County has seen new COVID hospitalizations and deaths decline over the last six weeks while the number of new cases exploded is remarkable.  There were 1,512 new cases identified since the week ended June 1 versus 456 new cases over the previous six weeks, for an increase of 232%.  But at the same time, the average number of new deaths fell 33%, from seven to five, and new hospitalizations dropped 39%, from 12 to seven.

Sedgwick County reported 490 new cases last week, putting the infection rate so far at just one-third of one percent.  The county doesn’t publish demographic data on deaths, but there have only been 28 recorded so far and, at least at the end of May, over 80% occurred in nursing homes.

Activity elsewhere is relatively low, although there are variations.

The statewide infection rate is just 0.58% or a little over one-half of one percent.

And for the record, the states that were never shut down by their governors have better overall COVID outcomes.  They have 70% fewer deaths per million of population and 7% fewer cases per million, according to Worldomerters.info.