The story, “School Building Upkeep Left To Local Taxpayers In Kansas, So Sometimes Sun Peers Through The Walls,” was written by a Hechinger Report reporter and published by KCUR April 22.

It begins, “In 2014, a cash-strapped school district in rural northeast Kansas turned to its residents with a plea: Pay a little more in taxes annually so we can renovate classrooms, update the wiring and give students better spaces to learn. Voters rejected the measure by a margin of 54 to 46 percent.”

“Two reasons citizens don’t approve more money is, one, they don’t think it’s necessary,” Trabert said. “And number two, maybe taxpayers can’t afford it. They’re being hit with tax increases and the government solution is to give them more tax increases.”

In addition to upgrading classroom HVAC systems and building plumbing and electric systems, the $9.8 million bond issue for USD 377 Atchison County Schools in 2014 also included a multi-purpose addition that would create new locker rooms, a new wrestling room, a cheer and dance practice room, a new weight room and a new fitness room. The story doesn’t mention the upgrades to athletic facilities; it also made no attempt to explain why voters who live in the community and who send their children to school in the district refused to support every USD 377 bond issue floated since 1974.

According to the story, the problems in Kansas school districts were “amplified by Republican then-Gov. Sam Brownback’s controversial tax cuts that limited the available dollars for capital construction, renovations and repairs and contributed to a chaotic restructuring of school funding.”

“Between the 2008 to 2009 recession and what many in Kansas refer to as “the Brownback years,” school facilities took a serious hit. Districts that put off making repairs when money was tight are now playing expensive games of catch-up,” the story reads.

The reporter doesn’t mention that per-pupil school funding for USD 377 has increased by 75 percent since 2005, though enrollment dipped by 34 percent during the same time frame.  The reporter also falsely claimed Kansas made drastic cuts to school funding.

“School funding was not cut. Not for the district or the state overall,” Trabert said. “It fits the KCUR public narrative that schools don’t have enough money, but they didn’t take an honest look at the district’s finances.  The district lost a third of its students since 2005 but funding still increased, with per-pupil funding exceeding $15,000 last year; that’s 75 percent more than in 2005.  Enrollment dropped by a third but non-teaching staff only declined by 13 percent; why didn’t they proportionally reduce staff?  And why are they saying they can’t pay for maintenance when they’ve used some of their funding to increase cash reserves?  Operating cash reserves increased by more than $400,000 since 2005.”

USD 377 Superintendent Andrew Gaddis tells the reporter that replacing a broken boiler could cost the district $50,000.

“We’ll have to find the money somewhere,” Gaddis tells the publication.

They could find the money in one of several places.  The district finished the 2018 school year with $1.1 million in All Other (operating) cash reserves, of which $450,000 is set aside in their Contingency Fund.  The balance in that fund was just $300,000 the year before, which means the school board added $150,000 to that ‘savings’ account which exists for the express purpose of paying for unexpected expenses. 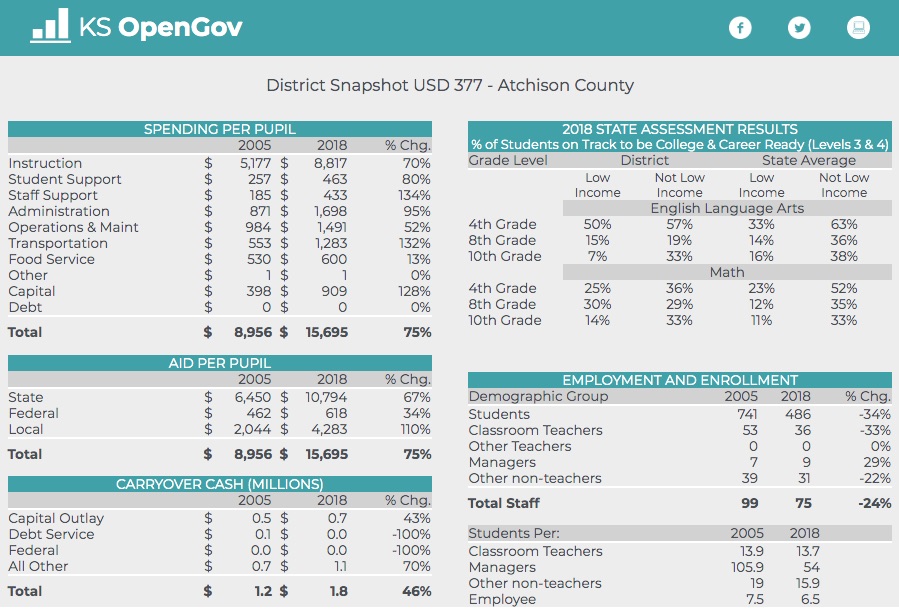 The district also finished last year with almost $700,000 in its Capital Outlay fund, which can be used to buy a new boiler.

Trabert also says the district has untapped Capital Outlay authorization that doesn’t require voter approval.  “Districts are permitted to asses eight mills of property tax for capital outlay but a KSDE report shows they are only using half of that authority.”  Raising the capital outlay to the full eight mills would generate another $275,000 per year for the district, says Trabert.