Kansas ranks in the bottom five of states in tax liability according to a WalletHub study.

To make that determination, WalletHub researchers applied the effective median state and local tax rate in Kansas to the U.S. median household income and home value to determine Kansas’s state ranking of 46. 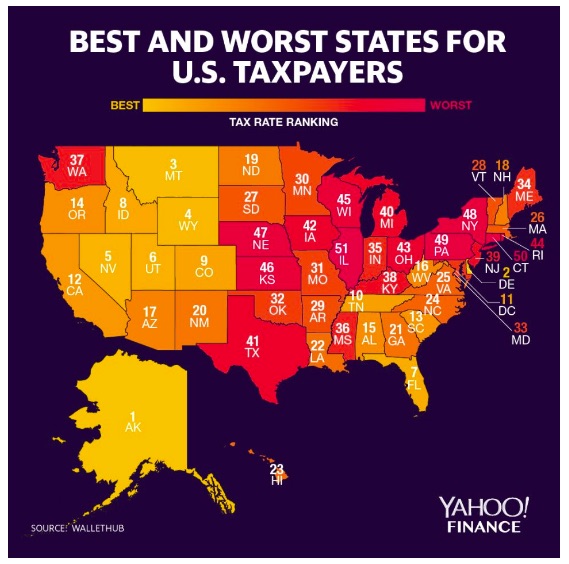 According to the WalletHub report, a typical U.S. household pays a little more than $7,800 each year to the federal government. State and local governments take another bite. A Kansas family making $58,082–the median U.S. income–pays another $6,813 to local governments in the form of things like sales taxes, excise taxes, and property taxes.

The Sunflower State ranked in the bottom half of all metrics the researchers used. Its effective income tax rate, 2.33 percent, was Kansas’s best ranking: 25th. State income taxes cost a Kansas household with the median income approximately $1,351 per year, while property taxes cost the same household about $2,713 per year.

WalletHub’s analysis determined that Kansas’s effective property tax rate is 4.67 percent and ranks 37th in the nation. Kansans pay even more annually in sales and excise taxes. WalletHub estimates the state has effective sales and excise tax rate at 5.48 percent, or 41st in the country, costing the median household $3,190 per year.

Kansas is one of 16 states that taxes food sales, and the state and food sales tax rates rank near the very bottom of the pack. Kansas’s rates rank 50th out of 51 states, including the District of Columbia.

Though Kansas’s effective tax rate ranked near the bottom, the state’s overall rank which adjusts for its low cost of living is 35th, the WalletHub analysis found.

James Edwin Kee, one of WalletHub researchers and a professor of public policy at George Washington University, said taxes are often a secondary concern of working age people when they are deciding where to locate. In metropolitan areas that cross state lines, taxes and quality schools are a factor.

“On retirement, however, taxes play a bigger role because schools are no longer an issue,” Kee told WalletHub.