(Update – the original version of this story referenced a 5.3% property tax increase for 2021; a tiny quarter-mill reduction in the mill levy reduced the increase to 4.3% next year, 10.4% over two years, and 31.6% over five years.  We regret the error.)

Despite public outcry over a proposed 5.3% property tax hike to cover a 21% spending increase over two years (2019 to 2021), Johnson County Commissioners voted today to raise taxes by a revised amount of 4.3% by a vote of 5-2.  Commissioners Eilert, Fast, Hanzlick, Allen, and Klika voted for the property tax increase, with Commissioners Brown and Ashcraft opposed.

The $12 million property tax hike budgeted for 2021 is on top of the $16 million increase charged this year.

At a public hearing last week, Commission Chairman Ed Eilert argued they were not raising taxes — using the usual government sleight of hand — because the proposed mill levy including parks and library would have remained the same at 26.03 mills year-over-year.

Since 1997, property taxes for the county budget have gone up 264%, while inflation was 52% and the population increased by 44%.  Property taxes for the library and parks systems are also under the control of county commissioners, and with those taxes included, county commissioners have imposed a 277% property tax increase since 1997.  That’s almost three times the combined rates of inflation and population. 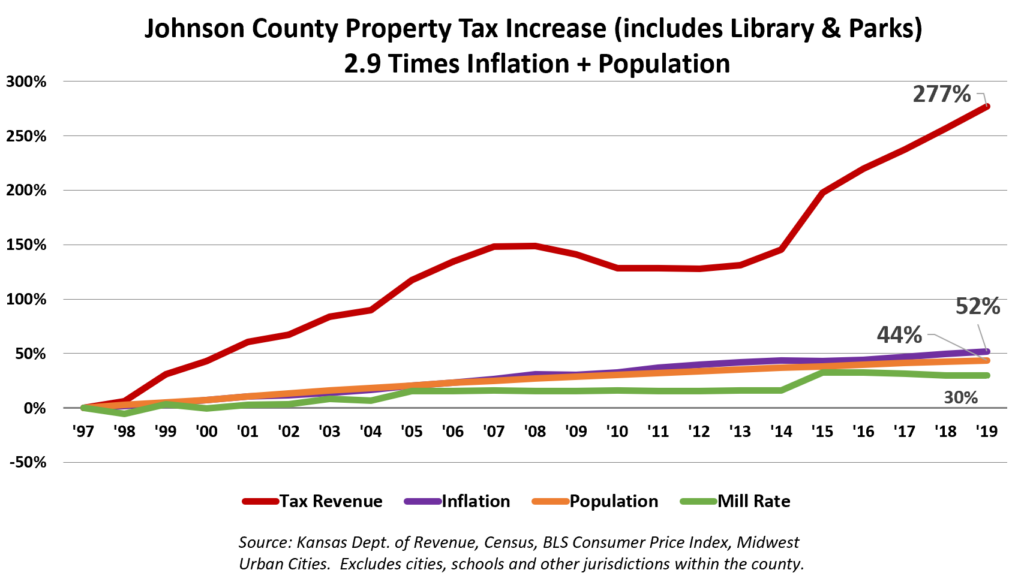 Local small business owner Rebecca Shipley, who also spoke in opposition to the budget at a public hearing last week, lambasted the tax hike as “cruel.”

“Any increase of any kind, be it be a mill increase, a sales tax increase, an increase in property value is cruel,” she said. “It’s cruel. There are thousands of businesses in Johnson County shuttering their doors.

“As a small business owner, I work my budget. I look at what I can cut, what projects I can put off, how I can cut hours, how I can take a salary decrease to stay afloat. Do you understand that’s what we expect you to do? Do you understand that this county has only been growing by one percent for years, but our tax increase has been going up by 25%? That’s on you seven. We elected you guys to lead, not to spend us into bankruptcy.”

Becoming heated, Shipley went on to excoriate the commission for allowing so-called “Big Box” stores to operate while shutting down small businesses.

“Small businesses were screwed this year,” she said. “You guys allowed Home Depots and Walmarts to stay open. Let me remind you, that you all give them property tax abatements to be here. How about you renegotiate with them to pick up some of the slack since they got to make all the sales and small businesses didn’t. How about you guys sit here and figure out what to cut.

“I fully expect that you will work for the people that elected you and to understand that we can’t take any more, and that you have the power to give us a break.”

Commissioner James Allen, deflected from the tax hike, by saying no other taxing entity in the county is rolling the mill levy back, and noting the county only controls 15% of someone’s tax bill.

Commissioner Mike Brown, preparatory to ripping his colleagues for raising taxes, noted that was incorrect, and that Edgerton voted to lower its rate by a half-mill.  He also noted that county spending has gone up dramatically.

“I said that last year when we had the conversation about the budget and it didn’t slow anybody down.”

County spending of $931 million next year will be 35% higher than it was in 2016, when the county spent $690 million.  The county’s 2018 budget proposal itemizes 2016 Actual taxes and spending, showing an almost $80 million / 30% increase in employee costs, a 34% increase in contractual services, and a 21% increase in commodities.

The combined payrolls for Johnson County and the Parks & Rec system was a little over $223 million, with 242 employees paid more than $100,000.  Chief Medical Officer Sobia Shaffie was the highest paid, at more than $271,000; County Manager Penny Postoak was the next highest paid at more than $247,000.

Along with the large spending hike, commissioners also imposed a 31.6% property tax increase, other taxes went up 27%, and charges for services jumped 28%.

The approved 2021 budget is projected to finish with $318.7 million in reserve, which is almost a $71 million increase since 2016.  Put differently, the county will take in $71 million more than it will have spent over the period, but the five commissioners who voted for the 2021 budget still decided to raise property taxes next year.

Noting the COVID-19 pandemic, Brown pointed out how bad the timing is for a tax increase.

“This couldn’t be coming at a worse time,” Brown said. “We should have spent the last four months finding ways to cut spending at Johnson County, but in reality what we got from the county manager and her office was an endless parade of department heads … explaining to us why they needed more money. I didn’t hear one of them mention the taxpayer.

“In my opinion it is shameful and it’s embarrassing that the Johnson County Board of Commissioners is … ‘blaming a property tax increase on the valuation appreciation of your real estate.’ That should not be the case.”

Brown said the board should have lowered the mill rate to keep collections steady or lowered it further to give a tax cut.

“We in effect and in reality, raised taxes on Johnson Countians, at a time when we should have been cutting them,” he said. “We should be voting on a property tax decrease, not an increase right now, but that would have required leadership from the majority of this board and that is not at all what has happened.

“The taxpayer has heard that there’s an election coming up and I encourage them to vote accordingly. We are taxed out.”

Rather than engaging in a discussion of how to possibly reduce spending by $14 million to avoid a property tax hike, several commissioners, notably Eilert and Hanzlick, merely spoke of how well county government has performed.

Brown told the Sentinel, “Yet again, the Johnson County Commission and the County Management team missed a great opportunity to cut the taxes of hard-working people. It seems doing the right thing is impossible for some in our county. I stand with the people.”