Single tax filers in Kansas earning over $50,000 and couples with incomes over $100,000 would be subjected to a new, fourth tax bracket that is endorsed by Governor Kelly’s Tax Council.

The suggestion is camouflaged in a deeply-buried nod to the recommendation from Kelly’s Commission on Racial Equity and Social Justice.

The message from Kelly’s hand-picked Tax Council is clear: higher taxes to pay for more spending.

The 24% increase in spending under the Kelly administration would continue its upward arc as the Tax Council recommends:

Nearly nine in ten members of the Tax Council are former officeholders or affiliated with government, so its focus on growing government and a fourth tax bracket comes as no surprise.

The Council often appears to give a tax benefit with one hand and snatch it away with the other. For instance, it endorses the elimination of the state sales tax on food, but it recommends expanding the sales tax base by proposing to tax digital goods, such as video, music and multimedia files, and ebook purchases. Also, the Council recommends expanding the homestead property tax exemption while suggesting expanding local government authority on excise taxes, such as those on tobacco, alcohol, and fuel.

The Tax Council’s philosophy appears based on the mythical “Three-Legged Stool” of government tax policy, criticized by some economists as a thinly-veiled effort to raise income taxes. Its basic premise is that taxation should be equally divided among income, property, and sales taxes for budget stability.

The real motive for the three-legged stool may be a way of justifying an income tax hike. Income taxes are the “shortest leg” of the proverbial stool, according to a study of Fiscal Year 2019 data by the non-partisan Kansas Legislative Research Department. It showed property tax collections totaled $5.1 billion; sales, use and excise taxes $4.9 billion, and income taxes $4.3 billion. 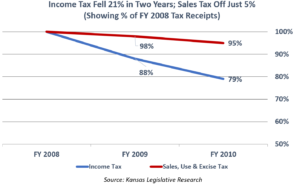 During the Great Recession, income tax fell 21% between FY 2008 and FY 2010, but sales and use tax were only down 5%.  This indicates that government is far better off relying more on sales tax than income tax because it is much less volatile.  A fourth income tax bracket could exacerbate revenue volatility.

Adam Smith is chairman of the House Committee on Taxation. He believes that the Tax Council’s conclusions are driven more by politics than economics.

“While I applaud the effort that went into the study of tax policy impact in Kansas, the recommendations appear to be purely partisan-driven in favor of the Governor, making their number one recommendation the elimination of state sales tax on food by directly using the Governor’s own catch phrase “axe the tax”. The council’s report conveniently fails to mention that the governor vetoed the plan to eliminate food sales tax in 2019, but the report continued to take shots at the 2012 Brownback tax cuts and give Governor Kelly credit for the state’s current financial condition. That blatant partisanship belongs in campaign flyers and liberal propaganda, not in an official report to the state. The research and data is interesting, but the subjective analysis and recommendations have little merit.”