This afternoon, Kelly said she may ‘have to’ issue an executive order to close bars and nightclubs because of rising cases.  But Denning’s reported findings are based on incomplete data.

Denning said 14.7% of COVID tests were positive before Douglas County almost simultaneously closed bars on July 3 and mandated that mask be worn in public; he said the positive rate was down to 6.3% and about where it’s expected to be.

Kelly noted that Shawnee County put a curfew on bars, and asked Denning if he’s able to parse out “whether it makes a difference to shut bars down early or close down completely.”  Denning said he’s studying that and hopes to report his findings soon.

Media, of course, failed to report on this Denning/Kelly scheme to close Kansas bars, just as they covered up COVID transparency complaints that Kelly ignored during the same meeting.

Like most government analysis, Senator Denning seems focused on the number of new cases, but he at least didn’t mention whether he’s examining the severity of those cases and the possible strain on the medical community.  Fortunately, that deeper analysis shows the vast majority of Douglas County’s new cases didn’t result in hospitalization or death.

The Douglas County Department of Health dashboard an uptick in weekly cases starting June 29 (blue line on the chart below), which coincided with the increase in the positive test rate (red line) Denning mentioned.  But the orange line, showing the number of COVID hospitalizations on each reporting date barely changed. There was one hospitalization on June 29, two on July 6, four on July 13, three on July 20, and four on July 27. 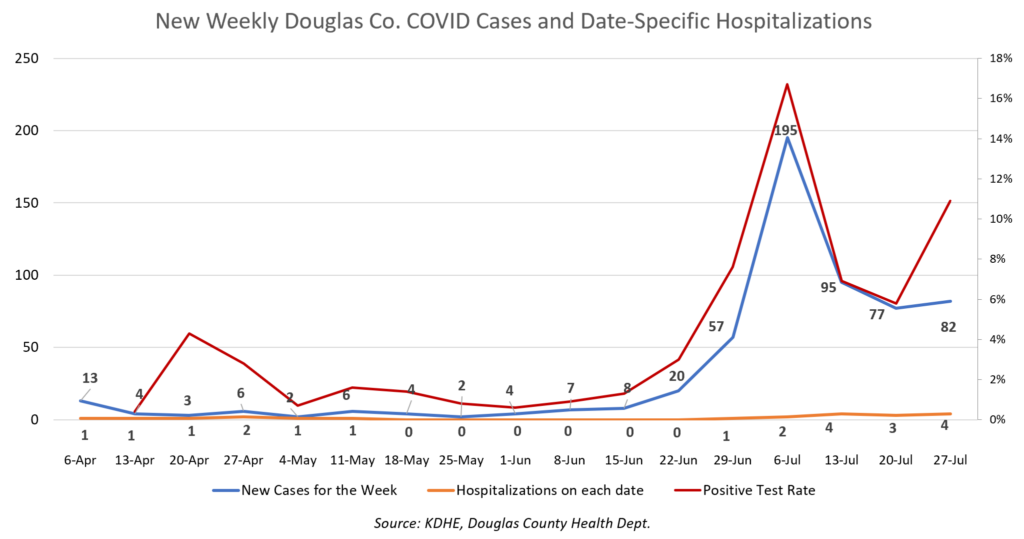 As of July 27, Douglas County reports that 496 of the 608 total cases reported are inactive, and the Lawrence Memorial Health System said only 39% of their beds were in use, with just four COVID patients, and only 21% of their ICU beds were in use.

One must wonder how many other deaths were changed to be COVID-related by KDHE.

With only two deaths throughout the COVID situation and no significant jump in COVID hospitalizations, the necessity of closing bars and putting people out of work legitimately comes into question.

“Government actions such as border closures, full lockdowns, and a high rate of COVID-19 testing were not associated with statistically significant reductions in the number of critical cases or overall mortality.”

Experience in other counties

Johnson and Wyandotte counties also had large case increases that have since declined, but neither county closed bars.

Cases in Johnson County jumped between June 29 and July 13, but have been trending down over the last two weeks.  The number of new COVID hospitalizations went up a bit but nowhere close to the proportional rise in cases. (There may have been more hospitalizations for the week of July 27; the county has somewhat slow in updating that statistic each week.)

Deaths, on the other hand, are trending down over the last six weeks, falling from an average 4.5 per week to 3.8 per week.

Wyandotte County saw new weekly cases jump between June 29 and July 20, but they declined for the week ended July 27.

And without closing bars or any other businesses in the interim, the number of new deaths remained low (never going above 4) and the mortality rate continued to decline, setting a new low record of 2.2% as of July 27.

Most counties don’t provide the level of detail as do Johnson and Wyandotte.  But the statewide hospitalization and mortality rates have been declining, and that’s been happening without bar closings.

Balancing the consequences and benefits

Similar to Newton’s Third Law of Motion (For every action, there is an equal and opposite reaction), every step government officials to take to curtail the spread of COVID has economic and social consequences on people.  To date, there are 335 deaths attributed to COVID in Kansas, but Governor Kelly’s shutdown of what her administration determined to be non-essential businesses led to 65,500 private sector workers losing their jobs in June.

And not to diminish the seriousness of COVID, but Kansans may be surprised to learn that more than twice as many people died of pneumonia this year than of COVID.  The CDC database that’s the source of this information says between February 1 and July 11, Kansas reported 830 pneumonia deaths, 315 COVID deaths, and 89 influenza deaths.

“Kansas Businesses are collectively the source of all wealth and ongoing prosperity. Under the current administration, there has been no relief during this pandemic for property taxes, sales tax, or consideration of addressing onerous barriers to doing business in our State.  We also owe laid-off workers the unemployment funding being held up at the Department of Labor.”

Lynn will be chairing the COVID Economic Recovery interim Study Committee in the upcoming months.  The committee is authorized for six days of hearings but the dates have not been set.