The 2020 KPERS pension payment listing shows Kansas has 2,993 KPERS ‘millionaires’ – state and local government retirees who will collect at least $1 million in pension benefits over their first 20 years of retirement.   That is 287 more than last year.  The complete list of KPERS ‘millionaires’ can be found at KansasOpenGov.org. 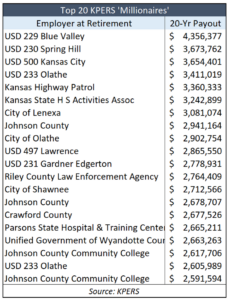 Education officials top the list of the 20 highest payouts, with the first four positions and ten total slots.  Seven of them retired from local school districts, one from the State High School Activities Association, and two from Johnson County Community College.  Retirees from cities and counties comprise the next largest group.

State law prohibits KPERS from releasing names, but it’s a pretty safe bet that the first four on the list are superintendents because they are the highest paid.  Pensions are based on a final average salary over the previous few years and years of service.

The superintendent at the top of the list, who will collect $4.4 million of the first 20 years of retirement, is probably Tom Trigg.  He ‘retired’ from Blue Valley in 2015 and has since been superintendent in Highland Park, Texas.  Trigg was hired in 2015 at an annual salary of $325,000 plus $13,800 in car and technology allowances, and a $1.2 million interest-free loan to buy a house.  His annual pension from Kansas is $217,819.

The second-highest 20-year payout goes to a retiree from USD 230 Spring Valley, who will collect $3.7 million.  Retired superintendent Cynthia Lane of USD 500 Kansas City, who oversaw perhaps the lowest-achieving district in Kansas, is probably the third-highest retiree and will also collect $3.7 million.

The Senate passed a bill this year that exempted retirement income for private-sector retirees who earn less than $75,000 but the House would not consider it.