In early August, Kansas Department of Health and Environment Secretary Dr. Lee Norman doctored a chart to justify mask mandates, claiming the counties that adopted Governor Kelly’s order were “winning the battle.”  It wasn’t true then, and it still isn’t true today. 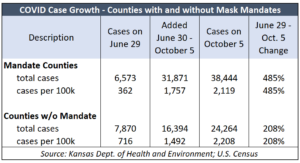 Adjusting for population (mandate counties have about 1.8 million people vs. 1.1 million in the other counties) shows the counties with mandates added 1,757 cases per 100,000 of population, or 18% more than the 1,492 added in counties without mandates.

The chart below tracks the growth on a cumulative basis, showing the gap grew progressively wider through the end of August as cases grew much faster in the mandate counties, and then closing the gap a little in September.  For example, between June 29 and July 6, the mandate counties added 108 cases per 100,000 of population; 137 more were added the following week, bringing the 2-week cumulative total to 245.  By comparison, the counties without mandates added 45 cases per 100,000 population the first week and 62 more the next week, for a 2-week total of 107.

Some health officials and school board members insist that mask mandates are necessary to allow kids to return to school and for customers to patronize local businesses, but the data from KDHE refutes their belief.

The gap is narrowed in September but health officials have said it only takes up to 2 weeks for a mandate to begin showing effect, not 8 weeks; crediting the mandate with closing the gap in September also ignores the fact that cases grew much faster in Sedgwick county in July and August.

But Dr. Byrne at least responded. The Sentinel also asked KDHE, the county health directors in Johnson and Wyandotte counties, and Wichita mayor Brandon Whipple for comment, as well as the school superintendents of Shawnee Mission, Olathe, Blue Valley, and Wichita; none of them responded.

Kansas isn’t the only example of high mask use not translating to lower case spread.

Consequences low in most cases 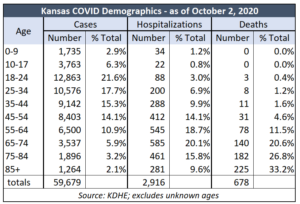 Outcomes are worse, unfortunately, for Adults 75+.  They account for only about 5% of cases (3,160) but a quarter of the hospitalizations and more than half the deaths.

Other charts and tables in the COVID Information Center include: