During a press conference, Kelly praised Toland’s commitment for growing the Kansas economy.

“I have been impressed throughout his tenure as Commerce Secretary by his enthusiasm, energy and commitment to economic development and business recruitment,” Kelly said.

“Toland’s economic development plan to flamboyantly gift taxpayer money to a few businesses might generate headlines and ribbon-cutting photo-ops, but it doesn’t work for taxpayers,” said Michael Austin, director for the Sandlian Center for Entrepreneurial Government at the Kansas Policy Institute. (KPI owns the Sentinel.) “There is little sign Kansans are benefitting from these deals.”

Toland headed Thrive Allen County, an Iola-based nonprofit dedicated to economic development in Allen County, for 10 years prior to his confirmation as Commerce Secretary. In that time, however, Allen County trailed the state in private-sector job growth, with employment falling 6.1% while the state gained 1.9% overall according to the Bureau of Labor Statistics (2008-2018).

Toland was known to grease the wheels for new businesses to locate to Allen County and compete with existing businesses. In one instance, Thrive Allen County advocated for a $100,000 grant to bring a meat cutter to town despite the presence of Bolling’s Meat Market — a Kansas Small Business Emerging Business of the Year award-winner, and Moran Locker in town.

At the time, Toland said city officials opposed his leadership, because they opposed incentives for businesses. Toland said G&W would not receive incentives as part of the deal. But Thrive’s website says they “led the effort to secure nearly $400,000 in public incentives” to the grocer.

Toland faced a rocky road to confirmation as Commerce Secretary. In a split vote, the Senate Commerce Committee voted against confirming him to Kelly’s cabinet.

During confirmation hearings, Senators reported receiving letters and phone calls from people in Iola urging them to vote against Toland’s confirmation.

“Part of the concern I have is letters and phone calls where folks in your community are concerned with what they will have to face if you are not appointed,” Baumgardner told Toland.

As lieutenant governor, Toland will wear dual hats in the Kelly administration. He will continue to lead the commerce department while also serving as Kelly’s number two.

As Commerce Secretary, Toland is tasked with leading the state’s economic development efforts and overseeing a $93 million budget and more than 270 state employees. Commerce also has oversight of several incentive programs, including PEAK and STAR Bonds.

“I believe the core function of the Department of Commerce is to recruit businesses to Kansas…and to grow our state’s economy,” Toland told the Senate Commerce Committee during his confirmation hearings.

Studies show, however, that PEAK and Star bonds aren’t effective.  A study by Nathan Jensen, then with Washington University in St. Louis, found that PEAK recipients were no more likely to create jobs than companies that didn’t receive the subsidy.  STAR bonds were studied by Dr. Arthur Hall, with the Brandmeyer Center for Applied Economics at the University of Kansas.  Hall’s analysis conducted on behalf of Kansas Policy Institute found that projects subsidized by STAR bonds did not improve job creation.

Austin says to date, Toland has fallen short. Today, Kansas ranks in the bottom third of states in new business applications, and the Sunflower State has the most small business closures among the Plains states since January 2020.

“History shows us keeping tax rates high and picking winners and losers doesn’t work,” Austin said. “Kansas is in its fifth consecutive decade of economic stagnation, trailing the nation in job growth and economic activity and the gaps are getting worse.” 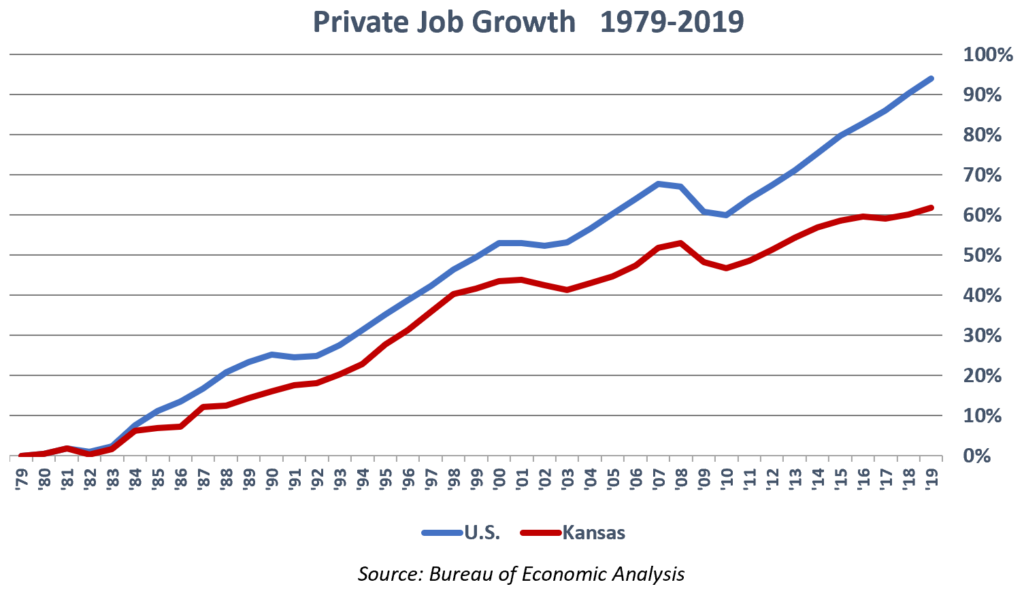 Kansas does not require Senate confirmation for lieutenant governor.