The Kansas Association of School Boards (KASB) is a membership group funded by local school districts, so it was quite surprising to see them criticize their members recently for low teacher pay. The column written by Mark Tallman didn’t chastise members, of course, but KASB and their members know that the blame for teacher pay is theirs alone.  Tallman’s column is intended to blame legislators and taxpayers for giving school districts a measly $1 billion increase (they wanted $2 billion), pointing out that teacher pay hasn’t kept up with inflation.

The inflation part is true, but KASB didn’t mention that legislators don’t determine teacher pay.  As Speaker of the House Ron Ryckman says, “Once the funding reaches the school district, it’s up to their local school boards to decide how it’s spent.”

And their decisions are not driven by lack of funding, as KASB wants taxpayers and teachers to believe. 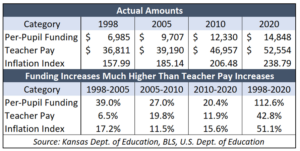 The Kansas Supreme Court ordered a $775 million funding increase starting in 2006, and the Legislature passed a policy calling on schools to devote that money to Instruction; the goal was to eventually have 65% of all spending going to Instruction.  School boards got the money but they ignored legislative intent.

Teachers and other frontline workers continually ask legislators to increase funding so they can get pay increases.

For the record, the Kansas Supreme Court declared school funding adequate more than three years ago.  But even prior, districts had multiple options to raise teacher pay.

By the way, school superintendents hold the top four spots on the list KPERS ‘millionaires’ – people who will collect more than $1 million in pension benefits over their first 20 years of retirement.  Those four will collectively receive over $15 million over 20 years.

“Over the last five years, Senate Education constantly heard requests from teachers for pay increases.  We always remind them that local school boards make those decisions, not legislators.”

“While the Legislature continues to increase funding for our K-12 schools, our teachers are not being given their fair share of it.  But I know legislators on both sides of the aisle would like to see more of that money focused on teacher pay and reach the classroom.”

School districts are supposed to conduct annual building needs assessments and use the results to inform the budget process. There is little evidence of that taking place, however, so the Legislature took additional action this year.

Former Speaker of the House Mike O’Neal says the new provision will at least prevent schools from claiming they lack sufficient funding to educate students.

“Current law already requires local school boards to approve budgets based on a required school-by-school needs assessment which includes, among other things, whether classrooms have qualified teachers in place and whether teacher pay is appropriate. The Legislature added to that law this year by requiring that these school board-approved budgets be reasonably calculated to have all students meeting educational goals. The largest component of the Instruction category is teacher pay. If the Instruction function is not operating at an acceptable level, the whole educational program is doomed to failure regardless of how well the other functions perform. That’s a direct quote from the  Kansas State Department of Education Accounting Handbook.”

State assessment results certainly support that ‘doomed to failure’ concern, as there are more high school students below grade level in Kansas than are on track for college and career.

It seems that that old saying about death and taxes being the only sure things in life should be amended.  It’s a sure bet that school districts will never be satisfied with funding and they won’t be straight with teachers and parents about funding and achievement.