Government subsidies for a small portion of employers is the preferred attempt at economic development among many elected and economic development officials in Kansas.  The subsidy menu includes a variety of offerings (grants, STAR bonds, tax incentives, etc.) that use taxpayer money as an incentive to attract businesses.  Recipients certainly get a benefit, but do taxpayer subsidies produce the degree of economic growth needed to justify the use of taxpayer money, which often shifts the tax burden to those not receiving subsidies?

Governor Laura Kelly has nominated David Toland to be her Secretary of Commerce, which effectively is the state’s chief economic development officer.  Toland was the first CEO of Thrive Allen County, a non-profit economic development agency, a position he held for more than 10 years prior to his appointment.  Thrive emphasizes the use of subsidies (they call them ‘incentives’) on their website, so The Sentinel went to Allen County to see how effective their efforts have been.

A visit to Iola, the county seat of Allen County, showcases some positive momentum in the area. A sandwich at Bolling’s market, a cup of coffee at Around the Corner, followed by a dip in the antique shops is an afternoon well spent. The numerous bike trails are increasing in popularity across the state.  But the economic data shows the area is struggling and doing worse than other rural parts of Kansas.

2012 through 2015.  Private sector GDP in Allen County declined 5.8 percent over the period but government GDP grew by 4.4 percent.  That puts Allen County in the group of 32 counties with the worst private sector declines in the state, falling by more than 5 percent.

Dave Trabert, president of Kansas Policy Institute (which also owns The Sentinel), says one criticism of subsidies is that they lead to a higher tax burden on citizens and business because government continues to grow and spend more, rather than use any expansion of the tax base to ease the burden on existing taxpayers.  County property tax data from the Kansas Department of Revenue and published at KansasOpenGov.org may reinforce that concern, with Allen County being particularly hard hit. 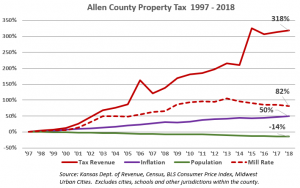 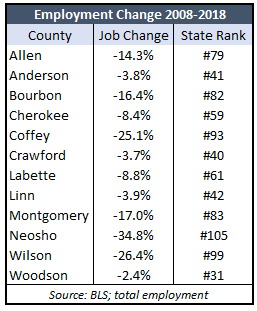 Employment data from the Bureau of Labor Statistics shows every county in the southeast corner of Kansas suffered job loss over the last ten years.  Allen County lost 14.3 percent of total employment (private sector and government combined), and that job change ranks Allen County #79 among the 105 counties in Kansas.  Allen County is in the middle of the 12-county southeast Kansas corner; six counties had better results than Allen County while the other five counties fared worse.

Woodson County had the smallest decline at 2.4 percent and ranked #31 in the state.  Crawford County ranked #40, Anderson County was ranked #41, Linn County followed at #42, Cherokee County is ranked #59 and Labette County came in at #61.

Many business owners are encouraged to apply for local government grants, but some people interviewed for this story expressed concern over local businesses competing against each other.

On February 5th, 2018 three retail food businesses and Regional Rural Tech Center, an area technical college, appeared before the Allen County Economic Development Incentive Committee to make their pitches for a share of a $300,000 grant. All requests combined were less than $300,000 yet only two grants were given out at a later meeting totaling $200,000. Marmaton Market requested funds to convert the existing Stubb’s Market in the town of Moran into a co-op. Marmaton received a $100,000 grant and $100,000 went to Regional Rural Technical Center for a research project.

Documents about the grant proposal meeting highlight an issue regarding Allen County’s economic development plans. Money is given to outside businesses to relocate, but existing businesses within Allen County are forced to compete against new entities, putting them at a competitive disadvantage. For example, at the February 5th meeting it was brought up that Marmaton needed a meat cutter. Minutes noted, “Bolling’s Meat Market and the store in Mildred; the competition is represented right here in the room.” Moran Locker, a division of Bolling’s Meat Market, is one block from Marmaton. Ben Alexander, a Thrive Allen County employee made the Marmaton pitch to the committee with the help of a Marmaton employee. The minutes reflect that Thrive Allen County, the designated economic developer for the region, openly advocated Marmaton Market against its competition to a county committee.

There’s no mention in the minutes of reasons for rejecting the unsuccessful grant applicants or whether the remaining grant money was ever distributed.

On Thrive’s website David Toland is credited with helping to construct Allen County Regional Hospital, a new 25 bed facility, and bringing G & W foods to a new 17,000 square foot grocery store in Iola. However, some Iola residents expressed questions of a potential conflict of interest on Toland’s part. In his Senate confirmation packet, Toland says he is a director of Iola Industries and owns 10 shares of stock in the for-profit corporation that was directly involved in several projects Toland managed during his time as President of Thrive Allen County.

One of those projects was the development of G & W grocery in Iola. After Allen County Regional Hospital opened in 2013, Allen County sold the land the old hospital was on and some of the surrounding land to Iola Industries and G & W Foods. A portion of land was sold to Iola Industries for $20,000 and was used to develop a block of apartments behind a new grocery store.

According to Lisse Regehr, the Deputy Director of Outreach and Advocacy at Thrive Allen County, the apartments are owned by Iola Industries. Yet, according to the Open Records for Kansas Appraisers website, the 12-unit apartment building is owned by a for-profit company named Eastgate on Madison and is appraised at $1.36 million.

When Thrive Allen County’s interim CEO Bill Maness was asked about potential conflict of interest concerns regarding Iola Industries and work with the city and county, Maness replied, “It’s a well-known fact they take no dividends. There is no personal gain to the members. They have been around since the 1950’s. They are a local philanthropic group.” Maness did not explain what he meant by philanthropic, but Iola Industries is a for-profit company.

In researching this story, a few Iola residents admitted Iola Industries is admired in the area but has transparency issues.

A reason Toland gave for the Iola’s lack of support was, “the city administrator has always disagreed with businesses that require incentives, but G & W will not be getting any incentives.” However, according to Thrive Allen County’s website G & W Grocery received $400,000 in public incentives. Thrive’s website does not mention that the $400,000 came from the City of Iola in April 2017, just over a year after Toland said G & W would not get any incentives.

The development and opening of the Allen County Regional Hospital is touted as a big success. According to the Iola Register the hospital cost $30 million dollars; $25 million in government bonds and $5 million in bank loans. Per the 2017 Kansas State annual audit of Allen County financials, the county still owes $27.3 million dollars on the 25-bed facility. However an examination of services at the hospital raises a question about basic healthcare.

In a statement to the Sentinel, Jesse Woltje the Supervisor of X-Ray and Mammography Compliance with the Kansas Department of Health and Environment (KDHE) confirmed, “Allen County has lost their credentials to do mammography.”

KDHE works with the Food and Drug Administration (FDA) to perform Mammography Quality Standards Act (MQSA) inspections at facilities accredited for mammography in the state. Allen County Hospital has not had accreditation or certification to perform mammograms since February of 2018.

“Allen County Hospital stopped doing mammography. They are not allowed to perform mammograms unless they are an accredited facility to do so.  The facility no longer has accreditation from the American College of Radiography or facility certification from the Food and Drug Administration,” said Woltje.

An FDA Report on the facility noted that due to serious image quality problems, “The FDA declared the mammography performed at this facility to be a serious risk to human health.”

When examined by the FDA in 2017 15 out of 30 mammogram images from clinical cases failed to meet evaluation criteria. In a follow up examination 22 out of 30 failed, leading to loss of accreditation in 2018. A former hospital employee, who asked to not be named for fear of reprisal, said that faulty mammograms were conducted by the hospital “for at least two years.” As a result of the report the FDA required Allen County Regional Hospital to send letters to patients notifying them of the issues with mammography. The 5 year-old $30 million dollar hospital that is noted as a centerpiece of economic development in Allen County cannot perform a basic preventative healthcare test, because it is a risk to human health. There is no reference in the Allen County Regional Hospital Board of Trustees 2018 minutes that the loss of mammography was ever discussed by the board in charge of the hospital.

The confirmation process for David Toland will begin March 20, 2019 in the Senate Commerce Committee. Toland’s confirmation packet says he is a director of Iola Industries and has numerous land holdings in Allen County. However, a search of the Kansas Business Entity Database turned up a business that is not referenced in his disclosure packet. Friends of Allen County Trails Corporation was incorporated in March of 2017 as a non-profit but has no other business filings. Toland is listed as the President, along with Thrive’s new deputy director Ben Alexander, Thrive’s Chairman of the Board Brian Wolfe, and Allen County Counselor Alan Weber.

A real estate holding is also missing from the disclosure packet, the old Iola movie theatre built in 1909. According to the Open Record for Kansas Appraiser website it is owned by Toland and a Jim Smith. While the non-profit and the movie theatre could just be an oversight, the association should be disclosed, specifically as Commerce Secretary Toland will have access to grants and incentives that apply to non-profits and historical development.

Whether government subsidies and other spending programs are the optimal means of economic development in Kansas is a subjective matter for legislators and citizens to consider.  But the economic data on jobs and GDP growth for Allen County doesn’t reflect breakout success.

[i] US Census has not released county population estimates for 2018; the decline reported between 1997 and 2018 assumes Allen County population declined in 2018 by the same percentage as it did in 2017.

Kansas is #37 in GDP growth over the last three years

Fed up with 4-H focus on DEI, local group forms an alternative