A series of Black Lives Matter posters in the hallways of Washburn Rural High School in the USD 437 Auburn-Washburn school district is causing consternation for parents and students.  According to school principal Ed Raines, signage must be submitted to the administration for approval by the sponsor of a student group; Raines says the Black Student Union is sponsoring the Black Lives Matter signs and he’s not been approached by any other group. 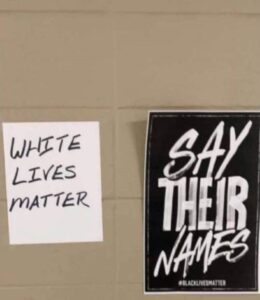 A White Lives Matter sign appeared this morning, posted by an individual student.  Raines says it was taken down because it’s against school policy for individuals to post signage.

The Sentinel was contacted by parents, asking what could be done about the situation.  They said parents and students are afraid to raise the issue with school administrators for fear of retaliation and being labeled racists.

Asked to say whether Black Lives Matter signs were posted and who sponsored them, Raines initially tried to brush us off, saying, “Thank you for reaching out to us with your questions and for your interest in our school.  As a District, we value open communication and feel like we have a great relationship with our community.  Please feel free to send these parents to talk with us – we’ll be happy to answer their questions.  Have a pleasant end to your week, Sir.”

But with that and subsequent written exchanges, the district attempted to avoid the ‘open communication’ it professes to endorse.

After pressing the issue, Raines next replied, “A variety of posters, including those depicting significant African American leaders, were put up celebrating Black History Month by our Black Student Union. Posters may only be placed in the building by approved school groups and organizations (Clubs, Activities, Athletics, etc.) and must be approved by the Club Sponsor (who is a staff member) and then by administration.”

But that reply only answered one question about the process for getting signs approved.  He still wouldn’t confirm whether Black Lives Matter signs were in hallways or which group was sponsoring the signs.

Pressed a third time, Raines finally acknowledged the signs existed and were sponsored by the Black Student Union.

We requested a ‘yes’ or ‘no’ response to each type sign, but Raines only provided a blanket ‘maybe’ with an explanation.

“We would have to believe that such posting would not result in a material and substantial disruption to the school environment, however.”

The Sentinel will monitor this situation and encourages student groups at Washburn Rural High to let us know if they request approval to post any signs.