An analysis of staffing levels prepared by Kansas Policy Institute (KPI) shows the University of Kansas appears to be far and away the most inefficient in staffing of the six Regents universities in the State of Kansas.  And given the desire of some legislators to find cost savings in the state budget to avoid more tax increases, some of the startling variances may well indicate potential for significant savings.

As the numbers below show, KU has the worst student-per-staff in the most categories. 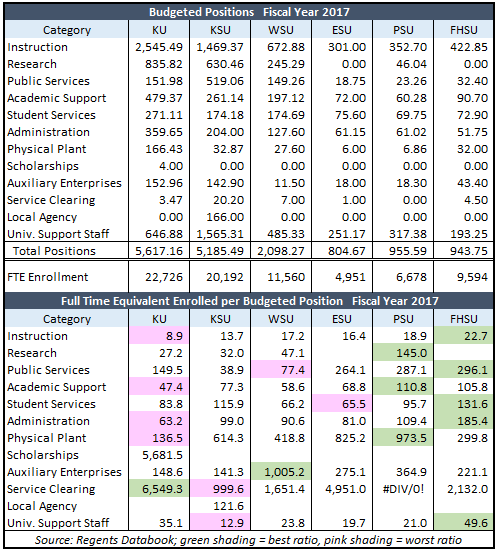 KU has 2,545 Instruction positions budgeted for 22,726 full time equivalent students, or 8.9 students for each position, which is the worst among the six universities.  Fort Hays State University has the best ratio at 22.7 students-per-Instructor position but FHSU also has a large online program that likely impacts their ratio.  Kansas State and Wichita State may be more apples-to-apples comparisons but they still have far better ratios, at 13.7 and 17.2 students-per-position, respectively.

“There are some understandable variances from one university to the next,” Trabert says.  “K-State is a land grant university and therefore has more employees in Public Services and University Support Staff in fulfillment of their mission.  But legislators should carefully examine staffing levels as a means of controlling tax and tuition increases.  After all, university staffing is part of the reason that Kansas has 27 percent more state employees per-capita than the national average.”