While the Olathe school district is pushing Critical Race Theory under the guise of Diversity, Equity and Inclusion, a whistleblower says the district administration is quite aware of problems with educational achievement.

The whistleblower — speaking on condition of anonymity for fear of retaliation — says students are allowed to take the state history assessment test as often as they want, and only their best performance will be reported.

The source identified several other issues within the district as well.

Teachers have allegedly been instructed to only call on students who raise their hand because calling on other students could make them feel uncomfortable.

Most troublingly, according to the source, a portion of middle school social studies classes have been set aside for remedial phonics training — using the Blueprint for Intervention series.

The Sentinel reached out to the Olathe school district last week asking if any of those allegations were true.

Moreover, the Sentinel asked how much of a problem reading proficiency is in middle school, what is being done to rectify the problem before students reach middle school and, additionally, exactly how students get to middle school without having been taught phonics in the first place.

As of press time the district had yet to respond.

Aaccording to the Kansas Department of Education’s 2019 state assessment, Olathe’s middle schools and high schools were in trouble. 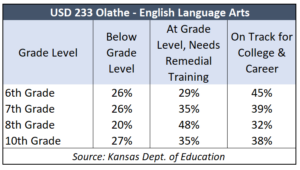 Those are pre-pandemic results; the 2021 state assessment results due to be released next month will likely be even worse.

USD 233 Olathe’s website proclaims a vision of “Students Prepared for Their Future.” These achievement results indicate that the district is falling far short of its vision.