Big utility bills paid by customers of the Kansas City, Kansas Board of Public Utilities helped fund some hefty pay increases for some employees last year.  The information was obtained in an Open Records request and the complete 2020 payroll is posted here at KansasOpenGov.org.

There were 27 pay periods last year compared to the normal 26 pay periods the year before, which is factored out in the column headed ‘Net Change 26 Pays’ in the table below.

General Manager William Johnson had a net increase of 21.1% and was paid more than $332,000.  Asked to explain the large increases, Chief Information Officer David Mehlhaff would only say, “these can be attributed to sick leave/vacation buybacks, overtime, job class changes, position changes.”  The BPU website still lists Johnson as General Manager, so it is unlikely that his increase resulted from buybacks of sick leave or vacation pay, as that is done upon retirement; Johnson shouldn’t be receiving overtime and his position title is the same as last year.

Mehlhaff did not respond when asked if anyone received base pay increases or cost of living increases. 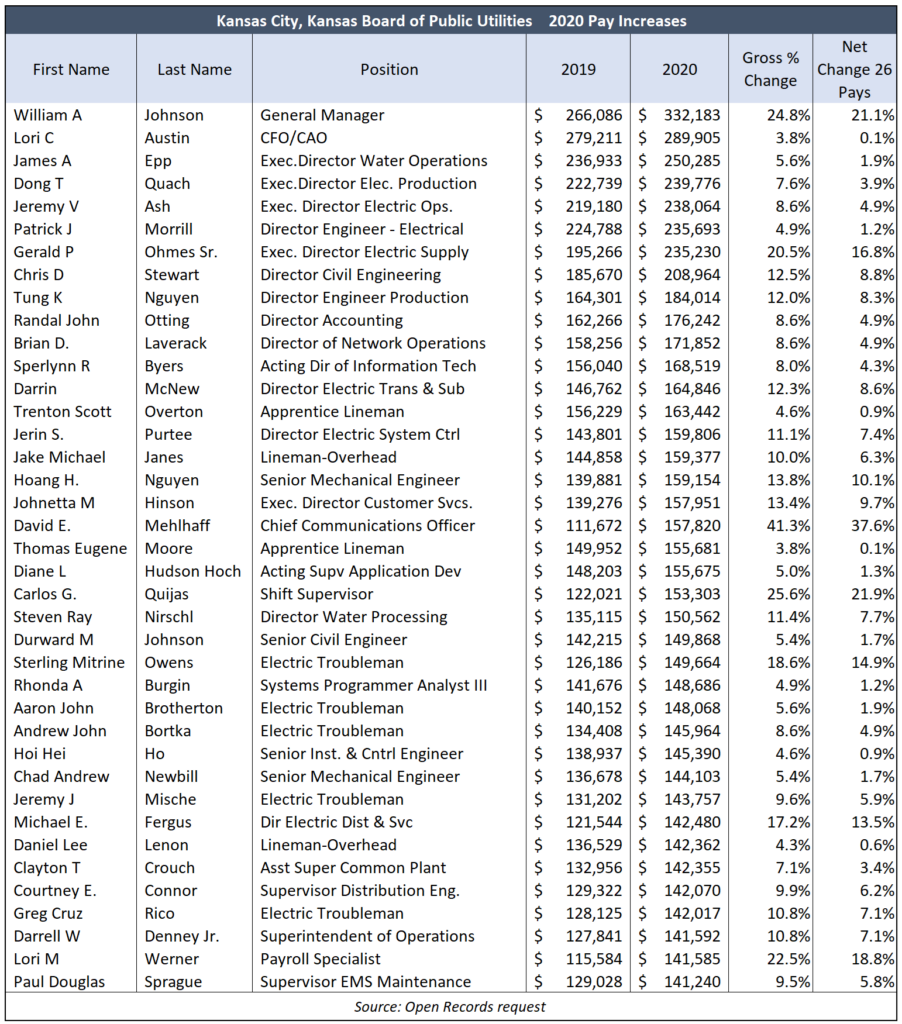 Gerald Ohmes, David Mehlhaff, and Michael Fergus also received double-digit net increases and are still listed on the BPU website in the same positions now as in 2019, indicating these managers wouldn’t have received retirement buyouts or had position changes, and managers typically don’t receive overtime.  Ohmes had a 16.8% increase and was paid $235,230.  Mehlhaff was paid $157,820 or almost 38% more than in 2019, and Fergus had a 13.5% increase and was paid $142,480.

A Sentinel report from last October found that KCK BPU customers pay much higher residential and commercial utility rates than customers of other companies across the eastern portion of Kansas.

KansasOpenGov.org is operated by the Sentinel’s owner, Kansas Policy Institute.