The tax-and-spend mindset of many state and local officials produced predictable results in the second quarter — government jobs increased in Kansas, but private-sector employment was nearly flat. 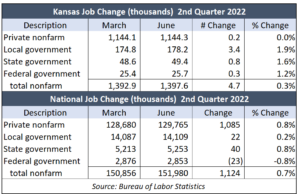 Preliminary data from the Bureau of Labor Statistics shows local governments added 3,400 jobs between March and June; there were 800 more state government jobs and 300 additional federal jobs.  But the private sector gained just 200 private-sector jobs or less than a tenth of 1%.

The story is just the opposite across the nation.  Almost 1.1 million private-sector jobs were added nationwide for a gain of 0.8%.  Local government jobs were 0.2% higher compared to 1.9% in Kansas, and state government jobs in Kansas grew at twice the national average.

This should surprise exactly no one in Kansas, as the dismal jobs report is symptomatic of what Yogi Berra called déjà vu all over again.  Excessive government spending leads to higher taxes, making Kansas even less competitive, so elected officials give out subsidies to a few businesses in the name of economic development.  And as a result, Kansas is in its fifth straight decade of economic stagnation, falling farther and farther behind national averages for job and GDP growth.

Kansas Governor Laura Kelly appointed tax-and-spenders to her special Tax Council, and they obliged by recommending a higher fourth tax bracket for single tax filers in Kansas earning over $50,000 and couples with incomes over $100,000.