A guest column in today’s Kansas City Star by a retired teacher makes an outrageously false claim about school funding to promote Laura Kelly for governor over Derek Schmidt.  The teacher may only be repeating false information she was given by education officials, but the Star’s editorial page knows her claim to be fabricated.

I know they have the facts because I gave them the school funding data as published by the Kansas Department of Education.  But the truth is irrelevant in the Star’s ‘Republican-bad, Democrat-good’ world. 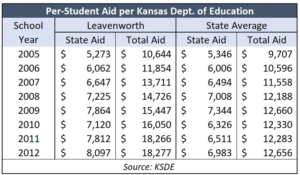 The amount of per-student funding is just one of several blatant falsehoods perpetrated by Wilson and the Star editorial page.

It’s true that that one piece of state aid was reduced during the Great Recession in 2010, but legislators back-filled most of it with extra federal funding.  Total funding per student increased for Leavenworth in 2010; statewide, there was an average drop of just 2.6%.

The Star and Wilson fault Attorney General Derek Schmidt and Governor Sam Brownback, but it was Democrat Governor Mark Parkinson who made the change.

School finance isn’t the only subject that Wilson and The Star failed; they also get an ‘F’ for civics.

They inaccurately criticize Schmidt for “spending millions” defending the state against school districts in Gannon v. Kansas, saying it was “his responsibility to ensure those schools were adequately funded.”  That’s not true.  Funding is the Legislature’s duty.  It is the Attorney General’s responsibility to defend the State, as did Democrat Attorney General Steve Six when schools filed their suit in 2010.  But Six and Parkinson are given special dispensation for their sins by Wilson and the Star because they are on the same political team.

Their most grievous offense, however, is not against Schmidt, but the tens of thousands of students that the public school system ignores.  The Star and Wilson defend the system while ignoring the fact that there are more high school students below grade level in Kansas than are on track for college and career.

In math, for example, 62% of Leavenworth high school kids are below grade level and only 14% are on track for college and career.  Statewide, the results are 47% and 20%, respectively.

They don’t seem to care that school districts refuse to follow state laws intended to resolve race-based and income-based educational discrimination (see here and here).   Who cares if the State Department of Education tries to change achievement standards to make outcomes look better than reality.  It is the system and the adults who work in it that matter.

This deplorable situation will not be resolved internally by the system.  Students need leadership from the Legislature and the governor’s office to give them a fighting chance to be successful in life.