Two sparsely populated counties have the highest and lowest COVID case rates in Kansas as of November 23, and that’s just one of the wide disparities noted across the state.

Norton County, with an estimated population of 5,361 in northwest Kansas on the Nebraska 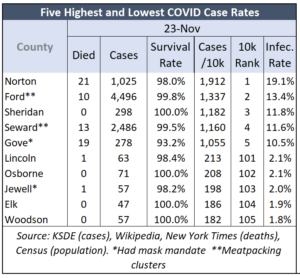 border, has the highest case rate at 1,912 cases per 10,000 of population.  Norton County is also home to the Andbe Nursing Home, which failed to enact its COVID-19 response plan that would have moved positive residents to a special care unit for isolation, according to the inspection conducted by Medicare and the Kansas Department for Aging and Disability Services.

Woodson County, with an estimated population of 3,138 in southeastern Kansas, is at the bottom of the COVID case rates listing, with just 182 cases per 10,000 of population.  With no deaths as of November 23, Woodson County has a 100% survival rate; the county also did not implement Governor Kelly’s mask mandate in July and also opted out of her November mandate.

Gove County, with the fifth-highest case rate of 1,055 cases per 10,000 of population, is the only one among the five highest case rates that adopted the July mask mandate; it has a 93.2% survival rate with 19 deaths attributed to COVID.

Two of the other counties with the highest COVID case rates – Ford and Seward – have meatpacking clusters but their survival rates exceed the 98.9% state average, at 99.8% and 99.5%, respectively.  Sheridan County, another sparsely populated county in northwest Kansas, has 1,182 cases per 10,000 of population and a 100% survival rate.

The table below of all 105 counties is one of several tables and charts in the COVID Information Center published by Kansas Policy Institute.  KPI owns the Sentinel.