Voters will soon be deciding whether property taxes should be increased to pay for a $38 million Shawnee community center. The ballots should hit the mailboxes of registered City of Shawnee voters this week and must be returned to the election office by noon on May 21. 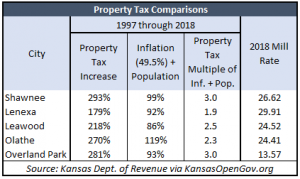 The proposal would increase the city mill rate from 26.62 to 29.54, which would be nearly the highest mill rate among larger Johnson County cities and much higher than nearby Olathe and Overland Park, at 24.41 mills and 13.57 mills, respectively.  Data in the adjacent comes from the Kansas Department of Revenue and is posted at KansasOpenGov.org.

In an editorial in the Kansas City Star, Shawnee City Council President Stephanie Meyer wrote that many Shawnee residents are now forced to use centers in other cities.

“This project, which is more than a decade in the making, will certainly be a turning point for our city in terms of recreational amenities, but I believe it will also be an important next step in continuing our forward momentum,” Meyer wrote. She did not return phone calls seeking comment for this story.

If the ballot initiative is successful, the city says the owner of a home worth $263,130 — the average value of a home in Shawnee– will pay an additional $88.32 each year in property taxes. To use the center, they’ll also be charged annual membership fees between $360 and $840.  City officials provided no estimate of the property tax increase on businesses, which would be much higher than on homeowners.

Chris Karner is chairman of the Vote No – There’s A Better Way Committee, a grassroots group of citizens opposed to the ballot initiative. He says the city’s estimates for what it will cost homeowners are based on last year’s property tax assessments, which continue to increase annually.

“Things have gone up this year. Every year, assessments will increase, too,” Karner says.

With interest, Shawnee property owners will pay $54 million over the course of 20 years for the community center debt, which will include a gym, a turf field, an indoor running track, an indoor pool and fitness center.

“People don’t want it,” says Shawnee resident Diana Chambers. “We’re taxed beyond taxed at this point, and you want us to fund something that’s going to lose money.”

Since 1997, the City of Shawnee raised property taxes by 293 percent, which is three times the combined rates of inflation (49.5 percent) and population (49.3 percent). Overland Park has also increased property taxes three times the rate of inflation and population, but passage of the proposed increase would give Shawnee the largest tax increase multiple among the larger Johnson County cities.  Opponents of the project also are concerned that budget battles over school funding in the Kansas Legislature could fuel additional property tax hikes in the next few years. 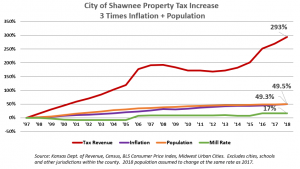 The Shawnee community center will lose money for the first 5 years it is in operation, recouping less than 90 percent of its operating costs through membership fees and rentals, according to the city of Shawnee website. However, the website notes, “municipal recreation is not intended to make a profit.”

Cost isn’t the only concern of The Vote No–There’s a Better Way Committee. Karner worries the new facility will also compete against existing fitness businesses.

“There are plenty of gym businesses in Shawnee,” he said.  For those gym owners, the new facility will be a double whammy.

“I talked to one guy who owns an exercise fitness place. He lives in Shawnee and he runs this business,” Karner said. “He would be hit with taxes on his home and on his business. Why would he want to pay taxes for something that ultimately hurts his business?”

All private businesses in Shawnee would see higher property taxes.

“It’s like throwing a pebble in the lake, and it just ripples out,” says Karner. “The grocery store, Walmart, Home Depot, all those places get hit with higher property taxes, and that’s going to lead to higher prices for the consumers.”

The city of Shawnee faces a handful of unmet needs in the near term, according to the committee’s website. Despite increase in stormwater fees from $3 to $6 per month in 2016, about 60 percent of the city’s 179 miles of stormwater pipe have exceeded their life expectancy.

“It needs $140 million worth of repairs over the next 10 years,” Karner says. “We have other real needs.”

One of Shawnee’s fire stations, known as Station 71, is likely due for a renovation or demolition.

“Today, it has very obviously outgrown its usefulness and functionality so I welcome the idea,” council member Jim Neighbor told the Shawnee Dispatch following a tour of Station 71 earlier this year. “They’ve done a remarkable job with what they have, but it’s definitely time to address it and make it state-of-the-art again for the next 40 years.” Neighbor voted in favor of forwarding the community center ballot initiative.

The Shawnee community center would add 12 full-time city employees to the parks department. Their proposed starting salaries are higher than starting salaries for police and firefighters, who risk their lives for the city of Shawnee. Karner argues it doesn’t make sense to pay someone who works in a gym with taxpayer money more than what the city pays for police and firefighters.  The City of Shawnee payroll listing for 2017 is available here at KansasOpenGov.org.

“That just sends the wrong signal to the people that serve our community,” Karner says. “If you put yourself in the shoes of those people, that is irritating.”

On the city website, officials say support for building community center has inched up on citizen satisfaction surveys in 2015 and 2017.

“The opening of the new Lenexa Community Center and the recent approval of the new Merriam Community Center has spurred increased calls and questions regarding the development of a community center for the residents of Shawnee,” the city website reads.

Shawnee resident Tracy Thomas calls the rush to build taxpayer-funded community centers in every corner in Johnson County, “a fad.”

“It’s time to end the flabby arms race,” she says.

In the 2017 Shawnee citizen satisfaction survey, 91 percent of respondents said they were satisfied with existing recreation services, and large majorities of respondents, over 60 percent in every category, said they were happy with the number of city parks, recreational youth and adult programs, and the city’s aquatic facilities.

Respondents said community leadership’s top priorities over the next two years should be street maintenance, code enforcement, and traffic flow and congestion management.

The proposed center would be built at 61st Street and Woodland Drive.

“Woodland is a major problem right now,” according to Chambers. “Tickets are given along there all the time.”

Karner says in some surveys, it looks like citizens on the west side of the city are interested in having a pool in that part of the community, but the proposed Shawnee community center includes much more than that at tremendous cost.

“I would really like to buy myself a Tesla, but instead, our family bought a 2008 Nissan Altima. It does the job. It serves the purpose,” Karner says. “Some people keep saying a community center is a need. It’s not a need. It’s a want. It’s a desire.”