According to a recent study of 500 registered Kansas voters, disgust with the status quo in Washington D.C. is universal across party and ideological lines.

83% of all participants strongly or somewhat approve of a Constitutional Amendment to put term limits on members of Congress (59% strongly, 24% somewhat) and only 6% are strongly or somewhat opposed.  Republicans favor term limits by a margin of 88-5 and Democrats by an 83-8 margin.  The margin is 93-3 for conservatives, 72-8 for moderates, and 83-10 for liberals. 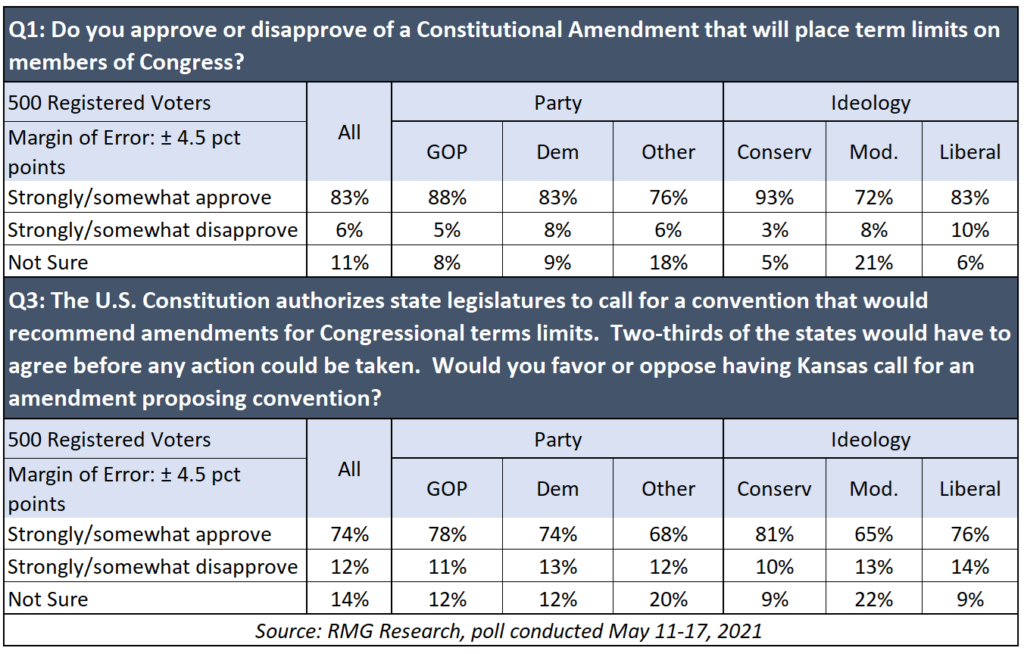 Two-thirds of the 50 states would have to agree to call for a convention of the states to recommend constitutional amendments for Congressional term limits, and the vast majority of Kansans say the state legislature should be one of those states.  74% overall strongly or somewhat approve and only 12% strongly or somewhat disapprove.  Again, similar margins exist across party and ideological lines.

Additionally, 80% of voters think it’s “not at all” or “not very” likely that congress will impose limits upon itself, 74% of Kansas voters would “strongly” or “somewhat” favor calling a “convention of the states” to consider such an amendment, 75% think their state legislators should support calling a convention, 78% would be “much” or “somewhat” more likely to vote for a state legislature candidate who supports limits. The Kansas poll has a +/- 4.5 percentage point margin of error.

The poll, which was conducted by Rasmussen, was commissioned by U.S. Term Limits, a national organization whose mission is “To enact and defend term limits on elected offices at all levels of government via the ballot box, legislatures and the courts with an ultimate aim of enacting a congressional term limits amendment to the U.S. Constitution.”

Sara Hart Weir, the Kansas chair of the organization, noted that nationally the numbers are remarkably steady across party lines.

“I believe that the results are reflective of the failures of Congress and the class of career politicians controlling Washington,” she said in an emailed statement. “Our founding fathers never intended for a ruling class.

“Overall, I believe that whether you are a Republican, Independent, or Democrat, you feel that your voice is not being represented and that the ruling class is more concerned about their next election than finding solutions confronting our nation.”

The national study is of 1,000 likely voters found that 79% approve of term limits for members of congress. The survey has a margin of error of +/- 3.1 percentage points.

“Among those who support the implementation of term limits, these voters categorically favor fewer terms for members of Congress over several terms which leads to extended incumbency,” the study’s summary said. “While many elected officials insist that six terms of 2 years totaling 12 years is appropriate, American voters reject that notion. The overwhelming majority of voters, 85%, support four 2-year terms or less, with the plurality, 42%, in favor of two terms of 2 years.”

Weir said the data gathered will be used to — among other things — try to get state legislators behind a convention on term limits.

“The issue of term limits is growing on both a national and local level,” Weir said. “We are gearing up to pass the resolution in Kansas. This research helps us show legislative leaders how widely the issue of Congressional term limits is supported here on the ground in Kansas.”