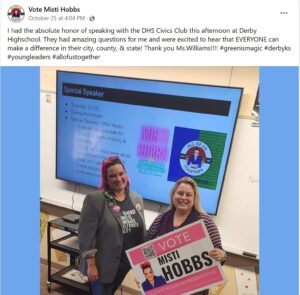 speak to the school’s civics club during a homeroom period.

On Oct. 25 Democrat Candidate Misti Hobbs visited the club, sponsored by social studies teacher Emily Williams, and a Tik-Tok video shows her speaking about her candidacy.

Kansas law prohibits public entities from advocating for or against candidates

Where Williams — and by extension — the Derby School District — may have run afoul of election law is in that picture.

Kansas Statute 25-4169a expressly prohibits any public employee from using government funds, time, or equipment to “expressly advocate the nomination, election or defeat of a clearly identified candidate to state office or local office.”

The Sentinel spoke to Director of the Kansas Governmental Ethics Commission Mark Skoglund, without giving exact details, and Skoglund said holding up a candidate’s campaign sign while next to the candidate on school grounds during school hours could certainly be construed as “expressly advocating.”

The statute also provides that: “Except as otherwise provided in this section, no municipality shall permit or allow any person to distribute, or cause to be distributed, within any building or other structure owned, leased or rented by such municipality any brochure, flier, political fact sheet or other document which expressly advocates the nomination, election or defeat of a clearly identified candidate for state or local office unless each candidate for such state or local office is permitted or allowed to do so in the same manner.”

Bringing the sign could be construed as a document under the statute.

Opponent not invited — at the time

Screen captures of the run-up to the event show Hobbs’ opponent, former State Rep. Leah Howell, was not invited at the time, and screenshots of Facebook postings show Hobbs had been promoting her visit at least as early as Oct. 13, and it was originally scheduled for Oct. 18, before being rescheduled to Oct. 25.

Howell served as an interim state rep in a neighboring district, and is running for an open seat.

On Oct. 29, The Sentinel emailed both Derby Superintendent of Schools Heather Bohaty and Communications Director Katie Carlson asking if the event was considered appropriate by the district and followed up with a phone message to Carlson on Nov. 1.  There was no response to either message.

However, The Sentinel spoke to Howell who said she received an invitation to come to speak at 10:41 a.m. the morning of Nov. 1, inviting her to speak on Nov. 7 or 8 — the day before or the day of the election.

“The email that I got from the teacher today also proceeded to tell me that it’s election season,” Howell said. “So, we’re not allowed to basically electioneer or campaign or anything.”

Howell noted that her husband Jim Howell is a Sedgwick County Commissioner, and while he has been invited to speak to civics and government classes at the district, it has never been in an election year and always in the context of how government works.

Howell said she was not going to take up the invitation, as it is simply too late in her schedule, but that this was simply not normal for candidates.

“I’ve lived in this town for 25 years,” Howell said. “I know what’s normal for when elected officials usually speak at the school. To my knowledge, it’s never happened before during election time.”

This isn’t the first time that the Sentinel caught school districts potentially violating election law by inviting a Democrat candidate to speak, but not the Republican candidate.  USD 229 Blue Valley did so in 2020.

(Editor’s note: Due to a reporter’s error, a previous version of this story stated Howell was the incumbent for the seat. The Sentinel regrets the error.)