On the day before classes were to reopen for in-person learning in USD 308 Hutchinson, Kansas, Faris Elementary School posted a “COVID 19 Mask Policy” for the kindergarten-through-sixth grade school that could potentially see a kindergartner suspended — indefinitely — for not wearing a mask.  But first, kids would be shown videos that describe a child’s “acceptable possible responses or feelings” in various social situations

The Hutchinson mask policy says all students and teachers must wear masks — except when eating, during hourly “mask breaks” at PE and recess, but adds: “While we expect our students to do well with this expectation, we wanted to have a plan in place to help reteach the importance of mask wearing for the safety of ourselves and others.” 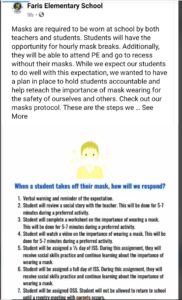 When parents negatively responded to the post, which went live on Aug. 26, 2020,  it was quickly taken down.

According to USD 308 Public Information Officer Ray Hemman, the post was taken down because it was causing conflict.

“We had parents who began attacking each other on the comments,” Hemman said. “At that point, the post was not useful.”

Why comments were not simply locked, is unclear, but Hemman said this remains the policy of Faris Elementary School, and indeed, the district.

However, should it get to suspension, a student as young as a kindergartener could find themselves suspended, essentially, indefinitely.

Hemman insisted that was not the case.

“The protocol … says nothing about ‘indefinite’ suspension,” he said. “It only states that if a suspension does occur, there will be a formal meeting with parents prior to the student returning.”

However, as there is no exact time frame set, and no date-certain when a student might return given, the suspension is — by definition — indefinite.

More troubling still are Hemman’s responses to questions about the “social skills practice” and “social stories” students will be required to undergo, should they decline to wear a mask.

Hemman described “social skills” as basically good manners, such as saying “please” or “thank you” and that mask wearing was added this year — but that there is no defined curriculum.

The “social stories,” and potential worksheets, according to Hemman are to help “guide” the students.

“Social stories are individualized short stories that depict a social situation that a child may encounter,” Hemman said. “They provide guidance and describe a child’s acceptable possible responses or feelings (emphasis added) to various types of social situations.

The phrase “acceptable responses or feelings” is repeated in response to questions about the worksheets.

“If worksheets are utilized, they would align to the appropriate social story and support the acceptable responses or feelings (emphasis added) to various types of social situations,” Hemman said.

While accurate, the phrases were used by Hemman in response to questions from the Sentinel.

No further response to the question has been received.

The Sentinel formally requested all mask policies on a building-by-building basis and was instead sent the “Salthawk Restart Plan” and “District Handbook.“

While CDC guidance is, indeed, that students should wear masks, it’s unclear just how necessary that actually is, given what a German study found, for young children.

As previously reported by the Sentinel, a Reuters story, run by US News & World Report, notes a German study of students actually attending classes found that schools may not be much of a factor in the spread.

Germany began reopening schools in May, and the study by the University Hospital in Dresden analyzed blood samples from almost 1,500 children from 14 and 18 and 500 teachers from 13 schools in Dresden and the districts of Bautzen and Goerlitz in May and June.

According to Reuters, “Of the almost 2,000 samples, only 12 had antibodies, said Reinhard Berner from the University Hospital of Dresden, adding the first results gave no evidence that school children play a role in spreading the virus particularly quickly.”