State Treasurer Lynn Rogers, a Wichita Democrat, recently took a hard stance against legislation that would expand educational opportunities for low-income students, many of whom are two to three years’ worth of learning behind their more affluent peers.  It’s not surprising, though, as Rogers has a history of putting public schools’ institutional interests ahead of what is best for students.

Rogers, a former school board member at USD 259 in Wichita, went so far as to prevent abandoned school buildings sold by the district from being used as a private school.

“I don’t think we want to use our tax dollars and basically help someone else start a school that would compete against us.”

When Rogers made that quote, he was a senior member of the USD 259 board that added a deed restriction to prevent competition. That 2017 action was after Christian Faith Centre bought the former Mueller Elementary School in 2013 and created Urban Preparatory Academy, a private school specializing in helping low-income students, and the USD 259 board didn’t appreciate students leaving the district for a better opportunity.

Lynn Rogers opposed the tax credit scholarship program that enabled students to attend Urban Prep, and now he’s using his position to oppose education savings accounts for low-income students that would be managed through his office.

His column in the Wichita Eagle said it could cost the Treasurer’s office between $4.5 million and $12 million for software management of education savings accounts created for students who are financially or academically at-risk, and he’d have to hire “an entire new division to manage the program.”

Rogers bases his cost estimates on having between 31,000 and 125,000 participate in the ESA program.  That is a consciously absurd estimate, based on participation rates of states with robust ESA programs.

The Kansas Department of Education (KSDE) says it cannot determine the number of students who would be eligible (mostly, students that districts identify as academically or financially at-risk), so for this purpose, we’ll use Rogers’ estimate of 125,000 eligible students.  With a 2% participation rate (double the rate of states with new ESA programs), there would be 2,500 kids in the program.  Rogers’ minimum estimate is 12 times higher.

Education savings account programs deposit a portion of per-student in an account for parents to use for tuition or other educational needs.  More than 20,000 students in five states are using ESA programs to get a different educational opportunity than provided by the public assigned to them by their zip code.

There will be some costs to manage the ESA programs, although not nearly as much as ESA opportunity opponents would have you believe.  But it’s deliciously ironic to see the education lobby oppose spending a few million dollars on kids who are financially or academically at-risk.  If that money was going to them, they would say it’s a fabulous ‘investment.’ 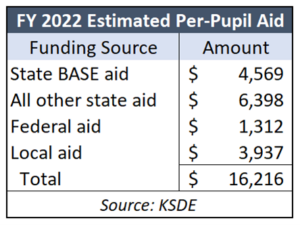 In total, however, education savings accounts could save taxpayers a lot of money (and give participants a chance for a better education).  Participating students would have the BASE state aid deposited in their account, which this year is $4,569.  Taxpayers currently provide another $6,398 per student this year in other state aid and most of that money will be savings (KPERS funding, capital outlay aid, and debt service aid would continue), the exception being that for the first three years a student uses an ESA, a good portion of the $6,398 would remain with the public school district.  Taxpayers would also save a portion of federal and local aid, estimated this year to be $1,312 and $3,937, respectively.  Total aid is expected to be $16,216 per pupil this year.

If taxpayers save $5,000 of the $6,398 in other state aid but none of federal and state aid, gross savings for 2,500 students would be $12.5 million, and that should more than offset the real cost of managing the ESA programs in the Treasurer’s office.

Kansas has school choice, but only for parents who can afford to move to a different neighborhood or pay private tuition.  Education savings accounts give low-income parents an opportunity for a better education for their children, and the competition to keep them in public school also helps the kids who stay.

Florida provides a good example.  Over the last 20 years, a combination of choice, transparency, and accountability propelled 4th-grade low-income kids from about the worst in the nation to the best!

KSDE says measurement on the National Assessment of Educational Progress since 2003 is “valid and reliable.”  Since then, Florida 4th-grade low-income students went from 18% to 28% proficient in reading, while Kansas went from 18% to 20%.  Florida’s 8th-grade low-income students jumped from 15% to 25% proficient, but proficiency fell in Kansas from 22% to 19%.

Kids who are financially or academically at-risk deserve an opportunity for a better education, and we all deserve honesty from elected officials and the education lobby.