The Kansas House of Representatives just approved legislation to give academically challenged students a chance for a better education, and predictably, Stand Up Blue Valley is apoplectic.  Their latest diatribe contains the usual collection of false claims, denial of student achievement problems in the district, and vitriol directed at legislators who dared to stand up for students.

Stand Up Blue Valley, a lobbying group that primarily works to elect legislators who will vote to raise taxes and increase school funding, is angry that Substitute for House Bill 2119 creates education savings accounts for students who are below grade level in reading or math.  Parents who take advantage of this opportunity would have access to a portion of state aid (about $4,500) in a Student Empowerment account managed by the State Treasurer; the money could be used for tuition to a private school and other student-focused purposes.  The legislation also expands the tax credit scholarship program to all low-income kids in Kansas, which provides scholarships up to $8,000 per student from money donated by Kansans.

Substitute for HB 2119 also fully funds schools as requested by Governor Kelly and directs districts to allocate a sufficient portion of their budget to instruction so that, in their determination, it’s enough to get kids to grade level.

Stand Up Blue Valley and the rest of the education industry oppose all of this because (1) they despise accountability and (2) they want to preserve the public school monopoly over under-educated low-income students, who are worth a lot of money to them.

A Facebook post from SUBV opposing the money-follow-the-child programs falsely says “schools are still operating below 2009 funding levels when adjusted for inflation.”  The 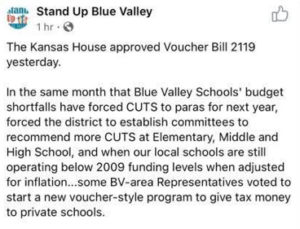 facts from the Kansas Department of Education and the Bureau of Labor Statistics easily disprove their claim.

On what planet is 19% inflation greater than 28% or 30% spending increases?

Stand Up Blue Valley also falsely writes, “Blue Valley’s Schools’ budget shortfalls have forced cuts to paras for next year” and are forcing the district to recommend more cuts to schools next year. (emphasis added).

Claiming the district is being forced to cut paras is another whopper.  Spending decisions are made solely by district officials and the local board, and they are forced to make any particular change.  A decision to cut paras, for example, would be one of many choices to balance the budget.

The district could choose to use some of the funding provided but not used in prior years, which is among the $51.5 million in operating cash reserves.  Another option would be to reduce some of the administrative bloat.  Blue Valley had 118 students per manager last year, whereas nearby Shawnee Mission has 182 students per manager.  Blue Valley could save about $7 million per year with management staffing like Shawnee Mission, assuming $100,000 per manager with pay and benefits.

The district’s complete payroll listing is on KansasOpenGov.org.

School districts can levy extra property taxes to cover costs of operating a new facility for a limited number of years, and then the tax goes away.  Newell says this piece of property tax is more than $4 million less than two years ago and will soon be gone.  She also confirmed the district chose to eliminate some paras – mostly in library media and lunchrooms – after looking at multiple options.

Using temporary property tax directed at initial operating costs of a new facility for regular operating costs across the district is not good budgeting, and the Legislature should strongly consider doing away with that element of the school funding formula.

21% of Blue Valley 10th-graders are below grade level

Money-follow-the-child programs are needed in districts all across Kansas, including Blue Valley.

Achievement in Blue Valley isn’t as bad as the average district, although part of the difference is due to Blue Valley’s much more affluent families.  That’s not to say that low-income kids can’t do as well, but that public schools have not closed staggering achievement gaps.

Stand Up Blue Valley’s opposition to better educational opportunities for under-achieving kids shows that they stand for funding systems, not students. It would be interesting to know how long they think it will take the public school system to get kids to grade level.

Put differently, how many more generations of students must be left behind while waiting for the public school system to improve?