Local officials not being honest about property tax was the impetus for the new Truth in Taxation Act, and some of them still aren’t being honest.

During last week’s revenue neutral property tax hearing, Allen County Commissioner Jerry Daniels ignored residents’ pleas to avoid another property tax hike, saying, “We lowered the mill levy 1.3 mills.  We haven’t raised anything. Since I’ve been here this is the 7th or 8th year that we reduced the mill rate.”

Allen County lowered mill rates as Daniels said, but commissioners still raised property taxes by 34% since 2013.  They raised taxes 321% since 1997, which is more than eight times as much as inflation plus population. 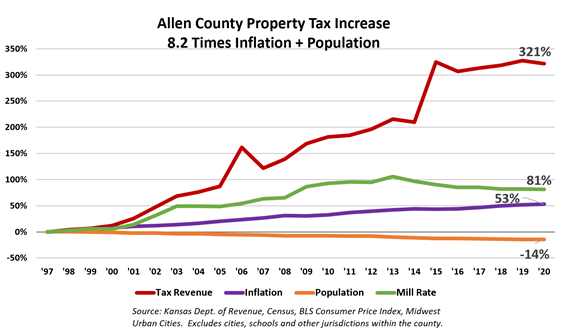 “We’ve lost a lot of businesses and over 1,000 jobs in the last 20 years in Allen County.  I’m just asking you to look at your budget and see if there’s a way to tighten it up and maybe not raise taxes.”

Iola resident Larry Macha cited statistics showing that property taxes in Allen County are among the highest in the nation for rural areas.  The Lincoln Institute of Land Policy analysis shows Iola has the 6th highest residential tax, the 2nd highest on industrial property, and the highest tax in the nation on commercial property.

He respectfully asked commissioners to give taxpayers a break.

“I just feel like it’s too much.  I thought we were getting kind of a windfall from taxes from the pipeline.  We should be getting some from the windmills, and that should be a windfall.  I’m just curious where that money is going.  If we’re getting these windfalls from tax money coming in, why are we needing to increase our taxes.” 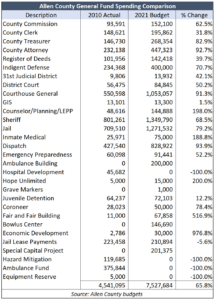 on their website, even though the new Truth in Taxation law requires publication on the website at least ten days in advance of the RNR hearing.  Prior years’ budgets available on the state website, however, reveal the profligate spending.

Total spending jumped 63% between 2010 and the 2021 budget, which is more than four times the rate of inflation.  General Fund spending shot up 66%, with almost every office or program growing multiple times inflation in a county with a declining population.

School districts are also subject to the Truth in Taxation Act, and some, like Allen County Commissioner Jerry Daniels, are not being honest about property tax increases.

Gina Shelton, Business Manager for USD 234, made a false statement to Fort Scott.Biz.

“This resolution has no impact on the property tax,” Shelton said, speaking of the resolution that will provide a 1.7% increase in property taxes collected for the district’s Local Option Budget.

Shawnee Mission school board president Heather Ousley convened the district’s revenue neutral rate hearing without uttering a word about the tax increases the district proposed increases.  USD 512 approved a 14.7% increase in Capital Outlay property tax without informing parents of their intent at the hearing, and the district has not produced evidence that they complied with the 10-day advance notice on their website.  I spoke at the hearing, requesting answers about the district’s proposals but Ousley rudely shut the hearing down with an arbitrary time limit after refusing to answer questions about the Capital Outlay tax hike.