Editor’s Note: This article has been updated to remove mention of deductibility from the state income tax; we regret the error.

A bill currently introduced in the Kansas Senate in the name of “equity” would allow counties across the state of Kansas to charge a local income tax to anyone who works in the county.

Senator David Haley (D-Wyandotte) whose district includes parts of KCK, would like to change that.

“Many Missourians work now in Kansas, especially in my county … and many in Johnson County,” he said. “But … they don’t pay 1% of their income for living in Missouri and working in our state.”

Kansas City, Missouri residents do pay the 1% earnings tax to KC, MO, but not to local government in Kansas.

“This bill is just a plea for equity. I’m a fiscal conservative, I don’t want to tax my constituents more, but my constituents who work in Missouri are already giving 1 percent of their income to Missouri.”

Dave Trabert, CEO of the Sentinel’s parent company, Kansas Policy Institute, says the ‘plea for equity’ is really about growing government in Kansas.

“This proposal is harmful to Kansans.  There’s no ‘equity’ here; it’s just another way to raise taxes on individuals and give more money to local government in Kansas.”

While Haley says his bill, Senate Bill 400, is aimed at workers crossing the state border to work in Kansas, the text of the bill doesn’t say that. It would simply authorize counties — with a vote of the residents — to collect what amounts to a local income tax.

County commissions would have to put it to a vote of the residents, much like a sales tax increase, and would be required to renew the tax every five years .

Haley said that while his intention is to allow for equity across state lines — particularly in the Kansas City area — it was not possible to craft a bill targeted directly at border counties.

He said constitutionally it “has to be (written that way) or it’s not uniform.”

He stressed that the bill is modeled on the Missouri law which has “worked very well.”

“I’m kind of ‘piggy-backing’ on Missouri,” Haley said. “We’re not trying to reinvent a wheel.”

Trabert says the earnings tax may ‘work well’ for government in Kansas City, Missouri, but not for individuals. 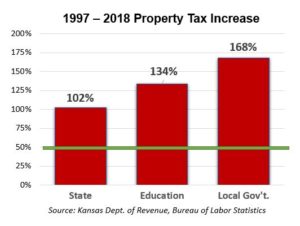 “Very few states have a local income tax and giving counties the ability to impose a new tax in Kansas would have very negative economic implications.  Local government entities have already imposed property tax increases that are more than three times the rate of inflation since 1997; they need to reduce the tax burden on individuals and employers.”

As of press time, no hearing on the bill has been set.