Governor Laura Kelly and her Commerce Department are behind Senate Bill 347 (SB 347), which could provide more than $1 billion in taxpayer subsidies to one company.  They are pushing legislators to approve the giveaway in less than two weeks, without knowing the identity of the company or where the project would be located.

Commerce officials also wouldn’t put a dollar amount on the giveaway (perhaps because the number is so shocking), but the math is easy. 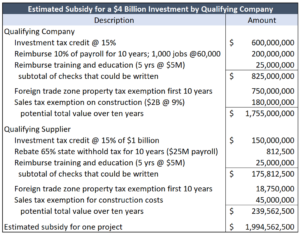 The mystery company would allegedly invest $4 billion and employ 4,000 people at a $50,000 average salary.  The company gets a refundable investment credit of up to 15% on its investment over time; that’s $600 million.  ‘Refundable’ means the state writes a check to the company if the credit is more than the company’s tax liability, and Commerce noted that depreciation would likely wipe out any profit for some time.

Next, the mystery company would be reimbursed up to $5 million for education and training for five years; those checks total $25 million.   Collectively, these subsidies could cause the state to write checks of up to $825 million to one company. 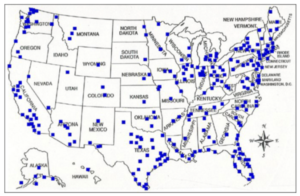 If the facility is built in a foreign trade zone, it qualifies for a 50% property tax exemption in perpetuity.  The value of this subsidy is more difficult to estimate without knowing where it will be located and how much of the investment is subject to property tax (machinery and equipment are exempt).  There are only two foreign trade zones in Kansas – in the Kansas City, KS area and the Wichita area – and speculation by Site Selection Magazine says KCK’s proximity to an international airport makes that the most likely location.  If the entire $4 billion is taxable, the forever exemption could be worth about $75 million per year.

There is also a sales tax exemption on construction costs that could be worth about $180 million if $2 billion is exempt at 9%.  Along with the reimbursable subsidies, the property and sales tax exemptions could put the total value to the mystery company at $1.755 billion.

SB 347 makes similar subsidies available to up to five qualifying suppliers that are worth up to $176 million in reimbursable costs and $64 million in property and sales tax exemptions.

The entire subsidy package in SB 347 could be just shy of $2 billion.

Having to write about $1 billion in checks out of the State General Fund was just one of the major concerns raised by Senate Commerce Committee members in this week’s hearing on SB 347.

Several senators noted that many of the new jobs would likely be filled by people already working in Kansas, putting additional strain on companies that are already struggling to find employees.

Kansas has the highest effective tax rates in the nation on mature businesses.  The Tax Foundation says subsidies in Kansas “keep tax costs for mature firms much higher than they would be if the tax burden were distributed more equitably.”

The subsidy offered to the mystery company is much more than the income tax payments of all C-corporations in Kansas, estimated to be $600 million this year.  Legislators should be looking at the comparative economic impact of eliminating or significantly reducing income tax liability for corporations and pass-through businesses that are taxed at individual rates.  Questions like ‘How many more jobs could they create if we gave them a tax cut instead of one new company?’ and ‘how many companies might relocate to Kansas if our tax environment was more competitive?’ should be part of the analysis.

Commerce officials touted a high return on investment for the $1 billion-plus giveaway, but they didn’t provide any specifics.  They didn’t provide a cost-benefit analysis, which would account for the opportunity costs of their proposal, including an increased tax burden on existing companies.  A cost-benefit analysis would also account for the economic growth that would result if the $1 billion-plus subsidy wasn’t spent on something else, like tax cuts for existing businesses and individuals.

The proposed mega subsidy also will ‘up the ante’ on all other subsidy programs, which will prompt higher demands from other companies and push those costs onto everyone else.

Commerce officials want the bill signed by Governor Kelly before the end of January.  They say the mystery company will make its decision in February.

Senator Virgil Peck (R-Havana) was one of several senators who objected to the rushed timeframe.

“We are told we need to pass SB347 so the Governor can sign it by February 1, but there are a lot of unknowns and we haven’t been given near enough information to make an informed decision.”

“If I asked them how we should spend $1 billion, I don’t think anyone would say, ‘give it all to one company.’”

Too much government discretion

While SB 347 lays out many qualification guidelines for subsidy eligibility and the amounts awarded, much of it is left to the discretion of an unelected bureaucrat – Commerce Secretary / Lt. Governor David Toland.

Commerce and Governor Kelly announced that there had been $2 billion in new capital investment in 2020 and credited themselves for more than 8,100 jobs created.  The Sentinel, sent Open Records requests to the Commerce Department, seeking documentation to support those claims.  Commerce responded that their claims were based on “pledges” from recipients of taxpayer money.  We sent another request asking for the methodology used to determine jobs saved or created, along with any policy documents setting such a formula.  The response was that no such documents existed.

“SB 347 is a mistake from several directions. It represents the start of many billion-dollar giveaways of Kansas taxpayer money. It expands government drastically with the decision-making granted to an unelected bureaucrat. And this money could go to foreign-owned companies. I do not believe for one second that the people of Kansas want to pay corporate welfare to big business.”

“As we seek to attract people to Kansas and grow our workforce, we certainly need to listen about significant investment opportunities. However, we need to be judicious in approving incentives and if we do so, use the proceeds to level the playing field for all Kansas companies via a more competitive tax structure. A rising tide should lift all boats.”