Governor Kelly’s press release announcing a $2 million effort to learn how to improve life in rural Kansas largely set up justification for more government spending programs, and the first stop on a 12-city rural listening tour reinforced that notion

Kelly’s June 5 press release says, “The Office of Rural Prosperity is dedicated to improving life in rural Kansas. The office is guided by the blueprint created by Governor Kelly, Lt. Governor Rogers and Secretary of Commerce David Toland, which includes:

Government spending programs and subsidies have been tried many times in the past, but that hasn’t stopped the continual decline in rural Kansas.  U.S. Census data shows 78 counties lost population since 1997 and analysis from Kansas Policy Institute (which owns The Sentinel) shows 67 counties lost employment.

The first stop on a statewide listening tour by the Office of Rural Prosperity happened in Nickerson, a small town in Reno County, on June 17 at the Nickerson Community Center. Several mothers came with kids in tow. A lot of people came in work uniforms or wearing polo shirts with a company logo. It was a packed house with every chair occupied by the time the 7 o’clock start.

After a short word from Lieutenant Governor Lynn Rogers that introduced the format of the night, everyone was broken up into groups. In groups, attendees were asked three questions:

The first question rendered a wide variety of answers. One gentleman who was raised in Nickerson, moving away only to come back replied, “Children need to compete on the world stage.” One woman said prosperity meant, “Stability, instead of always feeling like you are trying to fill the gap.” Another woman referencing the recent flooding in Nickerson after heavy rains in early June said, “solid infrastructure, [so] your town is not under water.”

When asked what Nickerson did well, multiple people brought up the senior center. One woman mentioned the community effort to start farmers’ markets. Thereafter, the conversation shifted to what people wanted.

A real ambulance service was mentioned. Currently, Nickerson only has a volunteer force. Residents also listed a lack of good infrastructure prevents attracting business and companies, ability to handle opioid and substance abuse, and lack of local daycare. A long wish list resulted from the meeting but session leaders didn’t address how those wishes would be financed or whether they would reverse economic erosion in Nickerson. 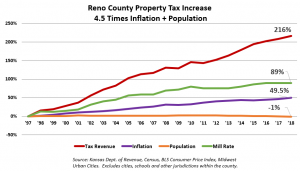 There are ten visits left on the rural listening tour. According to a press release from the Office of Rural Prosperity, “The tour is intended to foster new ways to help rural Kansas communities by hearing from the residents themselves.” According to Rogers, a report will be compiled from the group responses. How the report could be applied to policy is not known at this time, but the growing use of government incentives in the state could mean the report will be used to justify more spending programs.