Kansas media made a big deal about a ‘Republicans for Bollier’ announcement recently, when a group of Republicans endorsed Barbara Bollier–a former Republican turned Democratic nominee for U.S. Senate. Last week, Nancy Kassebaum, a Republican who represented Kansas for 18 years in the U.S. Senate, offered Bollier an endorsement as well, calling Bollier “independent” who “shares (her) belief in working with members of both parties to solve problems.”

But in a state where there are stark policy differences between Republicans, what does that really mean to voters?  Are those Republicans for Bollier staunch supporters of constitutional liberty, right to life, and economic freedom?  Or are they among the progressive Republican legislators who most often oppose those issues?

In this case, the 25 members of Republicans for Bollier who recently served in the Kansas Legislature have voting records that, collectively, are even more liberal than Bollier.

“No one should be surprised that some of the most progressive Republicans–as evidenced by their scores on our Freedom Index–in the Kansas Legislature have endorsed a Democrat for the U.S. Senate,” said James Franko, the President of Kansas Policy Institute. “Barbara Bollier’s voting record reflects the company she keeps, and regardless of political affiliation, many of those people are seemingly unconcerned about economic freedom, education reform, and other personal liberties.” 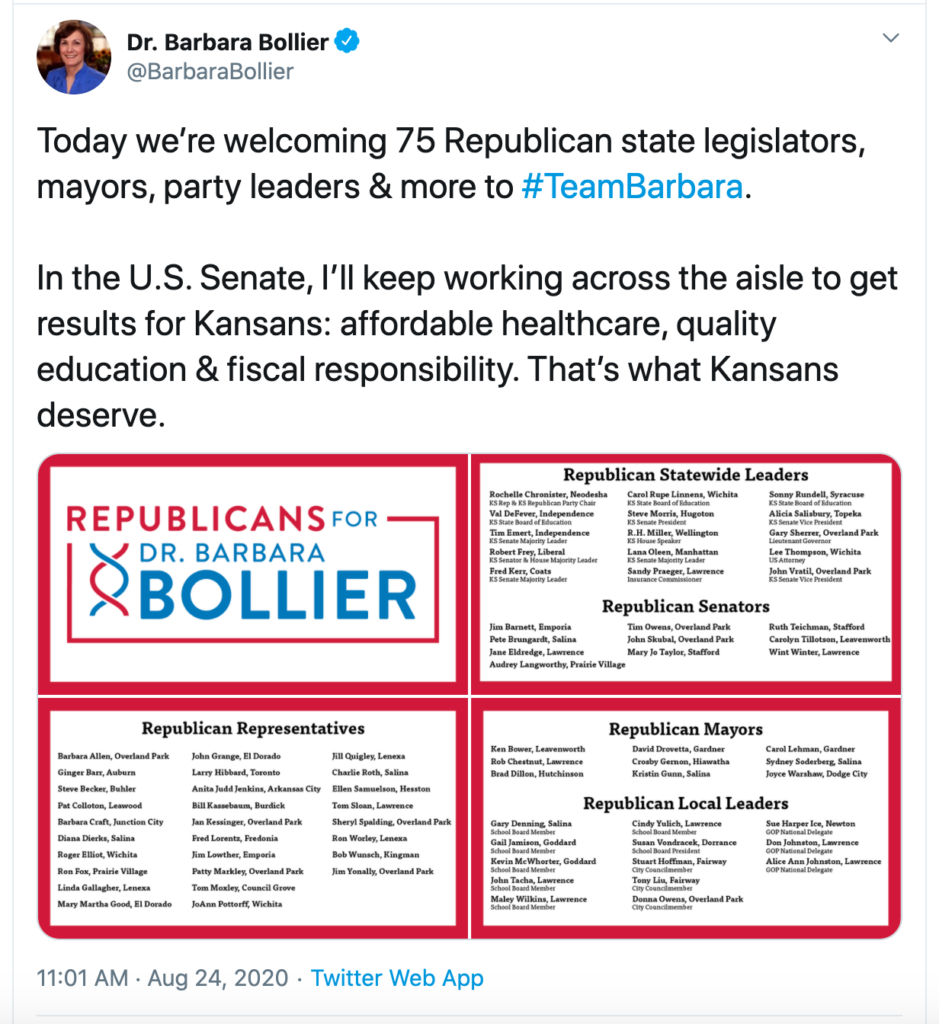 The Kansas Policy Institute, which owns the Sentinel, has been annually scoring lawmakers’ votes on issues related to economic and education freedom since 2012. A score of 100% represents votes for individual liberty in every bill scored; 50% is considered neutral, voting equally for and against economic educational freedom, and 0% would be consistently opposing those matters.

The adjacent table lists the lifetime Freedom Index score for each of those legislators and the last year they served.

None of the 25 have even a moderately positive score (above 50) but one – John Grange – is neutral at 50%.  The lowest score belongs to former Senator Tim Owen, with a score of just 8%.

Americans for Prosperity-Kansas also grades lawmakers, publishing a scorecard that grades legislators on their votes for economic growth and prosperity.  Bollier received an “F-minus” for her votes in 2019 and 2020. Only two Democrats–Francisco and Sykes–scored lower than she did.

“That means for every issue we score from electricity and utility costs for ratepayers and opportunities for Kansas jobs to the burden on Kansas families and overspending on the state level, Barbara Bollier has the third-worst record out of the entire Senate,” Elizabeth Patton, executive director of AFP-Kansas, said.

13 of the former Kansas House members to endorse Bollier, including Steve Becker of Buhler, Roger Elliot of Wichita, Anita Judd-Jenkins of Arkansas City, Patty Markley of Overland Park, and Jim Yonnally of Overland Park, were ousted from office when they lost to Republicans in primary elections.

Others, like former legislators like Sens. Pat Colloton of Overland Park, Tim Owens of Overland Park, and Pete Brungart of Salina, lost in Republican primaries and then endorsed the Democrat against their Republican challengers. Colloton lost to former state Rep. Jeff Melcher in 2012 and endorsed the Democratic challenger for her seat the next day.

When another Republican endorser of Bollier, former Rep. Tom Sloan of Lawrence, announced he would not seek re-election, the Kansas House Democrats formally recognized his service in a Democratic Caucus meeting. At the time, Sloan told the Democrats he had considered changing parties but opted instead to be an “irritant” to Republicans.

A few sitting legislators announced their support for Bollier, but they all lost Republican primaries in August. They include Sen. John Skubal of Overland Park, who lost to Rep. Kellie Warren; and Sen. Mary Jo Taylor of Stafford, who lost to Alicia Straub. The sole sitting Representative on Bollier’s endorsement list, Rep. Jan Kessinger of Overland Park, lost in the Republican primary on Aug. 4. Jane Dirks is the Republican-nominee for the seat Kessinger currently holds.

Political consultants believe his votes on the Value Them Both amendment last session may have been a critical reason for his primary loss.

“It was definitely a factor in Kessinger’s race,” said political consultant and lobbyist David Kensinger.

The Value Them Both initiative would have put an amendment to the Kansas Constitution before voters stating that there is no right to an abortion in the state’s constitution and that the legislature can regulate the practice of abortion.

The Kansans for Life PAC calls Bollier “an abortion fanatic.”

Bollier voted against the Value Them Both amendment. She also voted against banning abortions after 21 weeks, and in 2014, she offered an amendment to a bill about birth certificates for stillborn babies that would have replaced the term “human child” and replace it with “the product of human conception.” Her amendment failed.