President Joe Biden’s $5 trillion Build Back Better plan would have significant negative impacts on the Kansas economy, according to a recent paper by the Texas Public Policy Foundation that examined the original proposals.  (The so-called ‘framework’ is constantly changing.)

“The Build Back Better bill would deliver a double blow to an already disrupted labor market,” they wrote. “Most of the explicit tax increases in the agenda directly disincentivize investment, which reduces capital, wealth, wages, and employment. Meanwhile, the creation of new (and the expansion of existing) employment-tested and income-tested benefits would increase the implicit tax on working.”

Moreover, the taxes — as argued in the paper entitled “Reversing the Recovery” — would be job killers, while increasing the tax burden to working families enormously.

According to the paper, the plan, as currently proposed, over 10 years would cost 5 million jobs, decrease GDP by $1 trillion and decrease personal income in aggregate by another $1 trillion — or about $8,000 per household.

All while adding about $4.5 trillion in additional debt over that same time period. 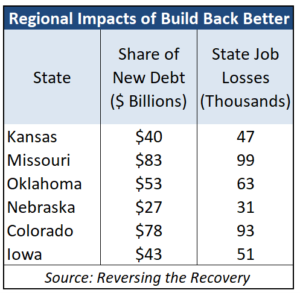 In Kansas alone, the share of the new debt comes to $40 billion, and 47,000 lost jobs over that timeframe.

In a recent telephone interview, Ginn noted that — combining both the “American Jobs Plan” and the “American Family Plan” — the projected cost is more like $6.3 trillion and the job loss estimates are probably underestimated.

“We took a look at different estimates, and made conservative estimates,” Ginn said. “We took the lower bound of those estimates, those costs and said, ‘OK, now what would this do.'”

What it would do, would be to devastate an already shaky economy.

“We find almost $4 trillion in less GDP growth than there otherwise would be over the next decade and then almost 5.3 million fewer jobs across the United States.”

The “Build Back Better Plan” has at least 10 separate tax proposals that would result in Kansas having the 19th-highest marginal federal and state tax rate on C-corporations and the 9th-highest on pass-through businesses. 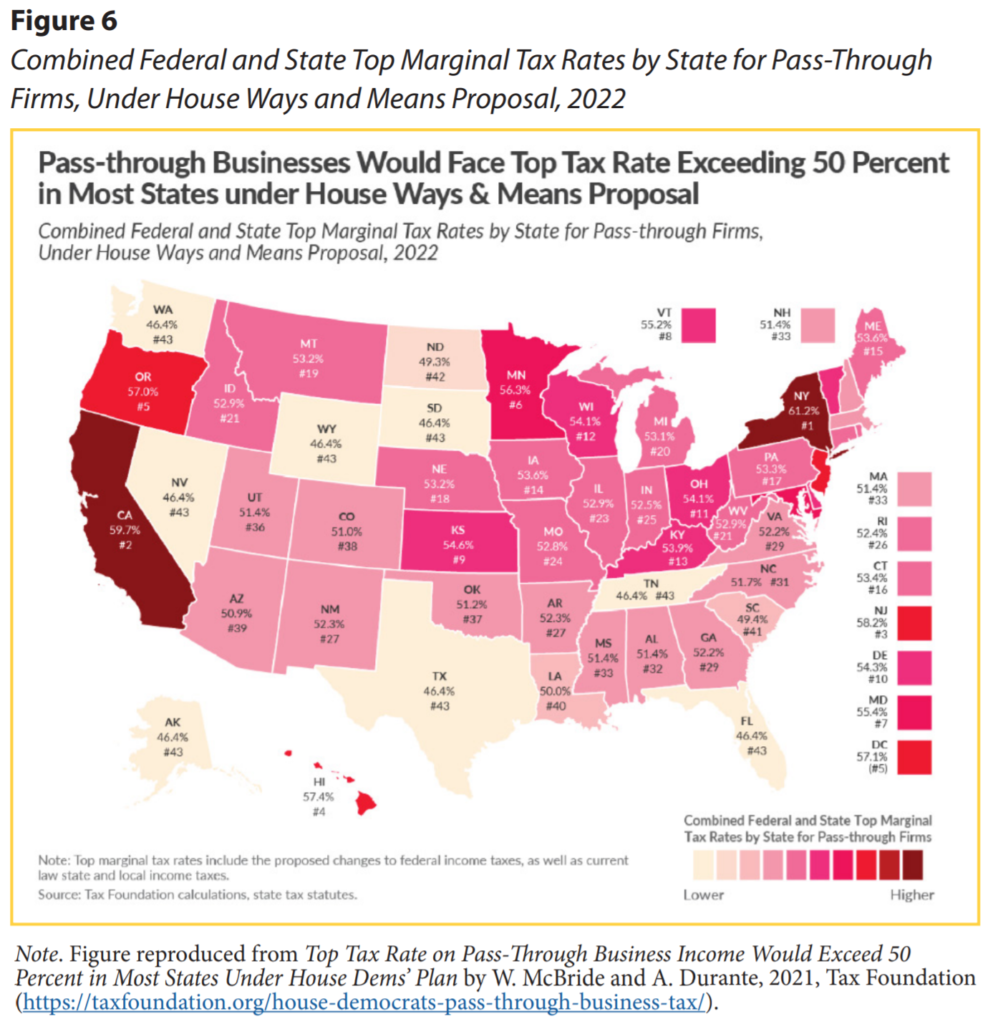 Biden’s plan would increase the top marginal income tax rate to 39.6% and add another 3% tax on income over $2.5 million for single filers.

The corporate tax rate would increase from 21% to 26.5%, and there would be an additional 3.8% tax on business income over $400,000 and phase out deductions.  Other increases include:

— Increase the statutory top marginal capital gains and dividend tax rate to 25%, lower the top bracket threshold, eliminate the step-up basis — which, as the Sentinel reported earlier this year, — would hit farmers and small business owners, in other words, the middle class, hardest; tax unrealized capital gains at death, and treat large amounts of capital gains as ordinary income.

— Replace the 401k tax deduction with a tax credit.

— Reduce the estate tax exemption to $3.5 million and increase the top marginal tax rate to 65%. Cap itemized deductions at 28%, instead of the income tax rate, for incomes above $400,000.

All of which would serve to stifle job growth.

Ginn was quick to note, that this is not job losses in the sense of “workers being given a pink slip,” but rather a massive reduction in job growth, which in many ways is worse because the concomitant reduction in GDP means a real loss of wealth — and also to note that he thinks the actual losses and costs will be worse than his admittedly conservative estimates.

“These are conservative estimates, I really do think that this is kind of a lower bound of what those job losses would be,” Ginn said.

Those pushing the massive tax hikes are doing so on the premise of making ‘the rich’ pay their fair share, but analysis from The Sentinel’s owner, Kansas Policy Institute, shows those with the highest income already are paying a disproportionate share of taxes.  For example, people in the top 1% of federal Adjusted Gross Income accounted for 20% of total AGI but they paid 40% of the federal income tax in 2018.

“I think at the end of the day, it’s not about jobs. It’s not about economic growth,” Ginn said. “It’s really about reaching their ultimate conclusion of an equitable situation somehow in the economy — to ‘take it to’ those with higher incomes — to those that have worked productively — and redistribute it to others

“There’s a huge cost, and that’s what we’re trying to highlight within this research is that this is a substantial cost to the American livelihood,” he continued. “I think there’s a lot of envy that’s associated with these types of policy initiatives, and ultimately just the dislike of productivity and entrepreneurship, which is what America is really driven by.

“It’s more about control than it is about any sort of economic assumptions, or economic model. And unfortunately, that’s what we’re running into today with the build back better agenda.

“We won’t know what America is anymore, and it’ll break us in the process.”