A recent column in the Shawnee Mission Post by Rep. Jarrod Ousley (D-Merriam) misrepresents the truth about civil rights, school choice, and other issues.  The Shawnee Mission Post is also culpable; we told them of our concerns, but they ignored our request to respond.  Together, they consciously distort the truth in defense of the education bureaucracy, and like the bureaucracy, they disregard the serious educational needs of many public school students.

The most grievous offense is ignoring the educational needs of students in Ousley’s district and across the state.

In fact, Ousley only makes one passing reference to achievement in his 2,000-word piece, saying Kansas has excellent public schools.  But he provided no context of ‘excellent’ so for the record, here are the 2021 state assessment results from the Kansas Department of Education:

Perpetually low student achievement, not “far-right extremists,” is driving parental demand for school choice.  A recent public opinion poll sponsored by The Sentinel’s owner, Kansas Policy Institute, shows 75% of parents and grandparents of kids in school say taxpayer-funded accounts should be available if the public school district is not meeting students’ academic needs.

The survey also shows 88% believe parents should have the primary say in their children’s education, and 57% are concerned that their kids are being exposed to objectionable material in public schools. 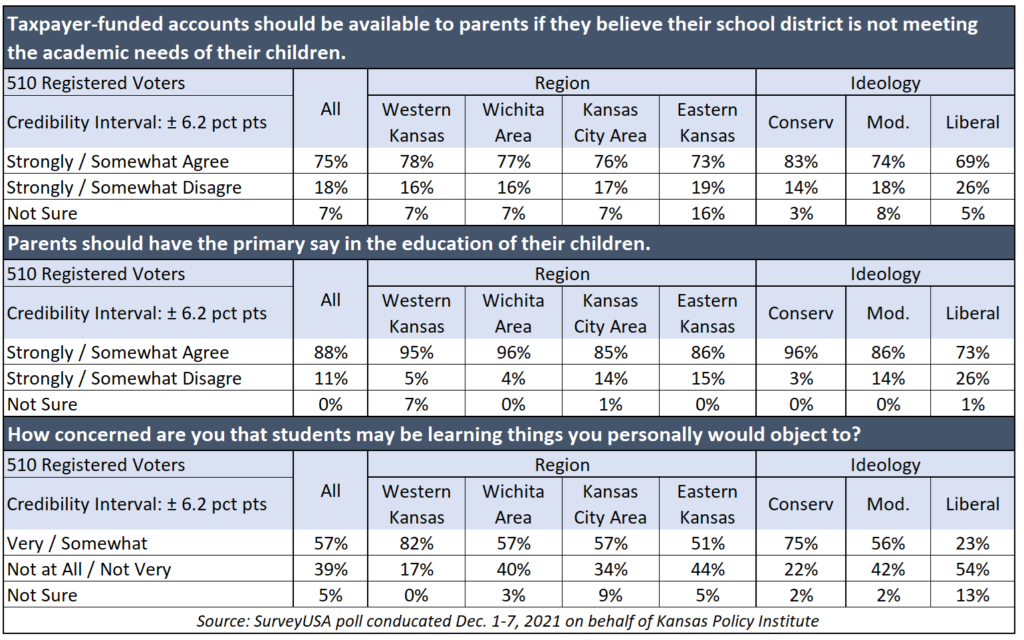 Ousley contends the demand for choice and transparency is some insidious plot to “defund public education” and “divert dollars to private entities for profit.” That simply isn’t true.  Parents want their children to have better educational opportunities.

Ousley also claims, “The Individuals with Disabilities Education Act (IDEA)…doesn’t apply to private schools.”  Not so, according to Kathleen Urbom, a Topeka attorney who specializes in education law.

“IDEA applies to all students, as a right of citizenship, wherever placed.  The duty to meet those needs falls on the recipient of the tax funds:  public education, wherever the student is placed.”

School choice is not racist; it’s quite the opposite

It’s fashionable these days to throw in a charge of racism with policy objections, and Ousley doesn’t disappoint.  He attempts to connect school choice with segregation efforts following the Brown v. Board of Education decision in 1954, and like others who have done so, he conveniently ignores the real history of school choice.

Jason Bedrick, Director of Research for EdChoice, exposed that illusion in a 2020 column. He debunked a similar claim by activist Steve Suitts, the founding director of the Alabama Civil Liberties Union.

“The title of Suitts’ column claims the “roots of the modern school choice movement lie in racism.” Conveniently for his narrative, he doesn’t start the history of school choice with Thomas Paine’s “Rights of Man” (1791) or John Stuart Mill’s “On Liberty” (1859) or even any of the other philosophers, economists, or public intellectuals writing about a market in education in the early 1900s.

“Instead, Suitts wants to start the clock with Southern segregationists trying to get around the landmark 1954 Brown v. Board of Education decision that declared segregated schools unconstitutional. Except he doesn’t give the full history there either. Suitts ignores the existence of segregationists and integrationists on both sides of the school choice debate.

“Yes, some segregationists wanted to open private segregation academies funded via vouchers. But it’s also true that integrationists were already using private schools as a means to foster racial integration while the public system was segregated. Moreover, many segregationists, like those running the state’s teachers’ union, the Virginia Education Association (VEA), opposed voucher plans because they feared choice would lead to racially integrated schools. They had already found ways to skirt Brown by redrawing district boundaries along racial lines.

“As historian Phil Magness and professor Chris Surprenant detailed in a recent academic paper, the Charlottesville, Va., school district and VEA officers publicly opposed a proposed voucher because if “any White parents withdrew their children for any reason, it would open up an enrollment space that a Black student could then claim with the backing of court-ordered integration,” thereby leading to the so-called “negro engulfment” (the Charlottesville public school district attorney’s term) of the public schools.”

Like nearly all issues, there are good-faith and bad-faith players on both sides.  Ousley is repeating a debunked effort to rewrite history.  And quite ironically, denying better educational opportunities to students of color, who are most in need of them.  To wit, 49% of White students in Ousley’s Shawnee Mission district are proficient in math, but only 12% of Black students and just 14% of Hispanic students. 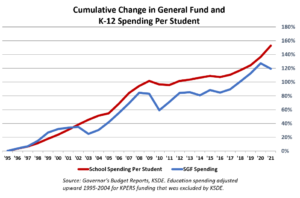 The data clearly disputes Ousley’s claim.  There were five instances since 1995 of General Fund spending declining and spending per student declined two of those occurrences – in 2010 and 2016.  Per-student spending also slightly declined in 2011, as a result of state reductions initiated by Democratic Governor Mark Parkinson in FY 2010 and a reduction in local funding.  But school officials could have avoided all but one spending decline if they hadn’t used some of their state and local funding to increase cash reserves.

Schools collectively had $468 million in operating cash reserves on July 1, 2005.  (We don’t have prior data.)  If operating reserves remained at $468 million each year, there would only have been one drop in per-student funding – a small decline in 2010 at the depth of the Great Recession.

Cumulatively, spending per student increased 153% since 1995 and General Fund spending is 120% higher.

In sum, Ousley consciously distorts the truth in defense of the education bureaucracy and like the bureaucracy, disregards the serious academic needs of many public school students.  And like much of mainstream media, the Shawnee Mission Post makes an in-kind contribution to the effort to keep kids trapped in underperforming schools.