Even as the Kansas Policy Institute, which owns the Sentinel, and the Kansas Chamber of Commerce released their plans for reopening Kansas last week, Kansas Governor Laura Kelly said she would not have a phase one plan until close to the May 3 date when her current stay-at-home order expires.

However, KSNT television reports that Kelly said Tuesday the May 3 target is a goal, but is not guaranteed.

However, a plan released just a few days before the projected end of lockdown gives Kansas businesses very little time to prepare.

Kansas has consistently trended approximately 70 percent below the national average on both COVID-19 cases and fatalities.  And while Kansas’ per-capita testing level is also below that of most states, a 50-state analysis of testing levels by Kansas Policy Institute shows very weak correlation between testing levels and positive COVID case identification.  Twelve states have higher testing levels than Kansas and also have fewer cases per million, and another 13 states have a smaller ratio of cases-to-tests than Kansas.

KPI economist Michael Austin concluded, “More testing is a good thing, but it shouldn’t be a requirement to reopening Kansas.”

Despite a hot spot developing around the southwestern Kansas meatpacking industry this week, the 7-day moving average of COVID cases statewide is much lower than late March and early April. 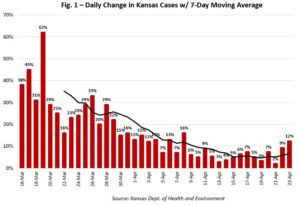 The trend in Johnson County, the most populous in the state, is even better. There, the 7-day moving average of has fallen from about a 20% average daily case increase to less than 3%. 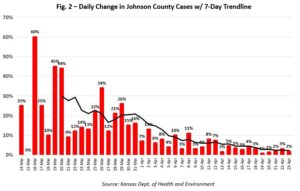 As of this morning, the Kansas Department of Health and Environment says there are confirmed cases in 74 counties, and 31 counties still have no COVID cases.  Of those 74 counties, 29 reported no new cases over the last seven days, and 16 of them had just a single new case.  That means 76 counties reported fewer than two cases over the last seven days.

“No more one-size-fits-none mandates.  No more essential versus non-essential.  If a business meets reasonable safety guidelines and public health guidelines, they should be allowed to open and serve their customers.”

Trabert cited statistics from Homebase.com, a scheduling and time tracking tool used by more than 100,000 local businesses across the country, showing the economic devastation caused by the shutdown. 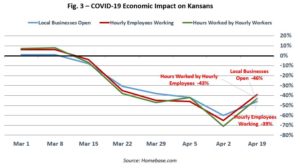 The Kansas Department of Labor has enormous technical issues that are preventing timely filing and completion of unemployment claims; still KDOL says the number of continued unemployment claims jumped 8-fold since March 7, going from about 11,000 to almost 93,000. 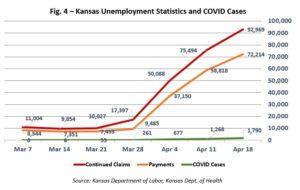 Trabert says with more realistic revenue projections, the state could be facing as much as a $1 billion budget deficit next year, and the shortfall will only worsen the longer the state is shut down.

“I think the lockdown should be lifted immediately, while protecting the most vulnerable citizens. If you are going to limit freedom, then you should focus on nursing homes and other vulnerable populations, not a one size fits all mentality,” Waymaster said. At this point, the citizens are educated and most will take the necessary precautions. The government needs to get out of the way and let the free market take over.”

A study released this week by the Kansas Chamber, suggests businesses are chomping at the bit to reopen — and do it in a way that protects public health.

“You try to assess how many businesses will just not reopen,” Maddox said. “And I think if you have businesses that were on the brink before all this happened, you may see those companies decide, ‘you know what, this is just, we just need to shut it down.’ I think a majority of the businesses will be able to weather this and come back. I think the PPP money will be very helpful to keep these companies going.”

Maddox said his bank had over 900 PPP loans approved in about 10 days following the first round of Paycheck Protection Program funding.

Maddox stressed that first, getting the economy moving soon will be key to recovery, and second that recovery will likely not happen fast.

“If we can get this economy restarted in the next 30 days, I think things will work out,” he said. “It’s going to take a while … this is a couple of years’ recovery. But as long as the regulators … continue to work with banks and allow us to work with our customers, and allow us to restructure loans and do some things that will help these companies get through this, I think we can make it.”

Waymaster was not as sanguine.

Maddox, however, believes there is a huge opportunity for Kansas — and the Midwest — to come out of the pandemic as economic winners.

“I think the Midwest has a real chance to be a big winner out of this thing,” Maddox said. “You’ve seen a flight from the coasts, already, to the center of the country, and a lot of companies … out of California and some of those places. This will expedite that.”

Maddox said the state government needs to start making the right moves now, not just thinking about COVID and that response, but what happens after as well.

“I think there’s just a unique opportunity here to say that Kansas is open for business and really tout the job has been done and the ability to mitigate the virus here in our state,” Maddox said. “And then create some policies and make sure that we have the right regulatory environment to be attractive to business.”

Maddox said some of the areas the state needs to look at are the taxing and regulatory environment — Kansas has some of the highest property taxes in the nation — and workforce development, to ensure the state has the employees industries are looking for as they transition from high population-density areas like New York City which are high-risk in a pandemic.

“I’m just proud of the state, the region and what we’re doing,” Maddox said. “There’s a real resiliency out there. And I’m very, very hopeful and feel very good about where Kansas and this region will end up coming out of the shutdown.”

States locked down had worse earnings, wages and salaries loss in 2Q