Sedgwick County set a new overtime payment record last year $6.9 million, which is 16% more than spent in 2017.  Much of the overtime goes to police, fire and jail personnel. A detention deputy collected the largest amount at more than $61,000. The next two highest collected overtime pay of $60,233 and $45,261 respectively. Overtime pay for detention staff alone cost $1.6 million alone in 2018.  That is a decrease from the 2017 amount of nearly $1.8 million.

The data comes from an Open Records request from Kansas Policy Institute and is published online at KansasOpenGov.org.  A full payroll listing of total pay collected by Sedgwick County employees is here.

There can be a wide variety of reasons behind increased overtime for counties, including an ongoing struggle in the county to hire and retain detention deputies. In December 2018, the Sedgwick County Sheriff’s Office lowered eligible age for detention deputies.  Deputies may appreciate the extra income that can be as much or more than their base pay, but working excessive overtime can take a personal toll, and having tired workers raises public safety concerns.

High amounts of overtime will also create higher pension costs for taxpayers.  The two hypothetical pension benefit estimates below were prepared for The Sentinel by Kansas Public Employees Retirement System (KPERS), based on the assumptions noted beneath the calculations.  The pension calculation formula is final average salary (FAS) times years of service times a percentage multiplier for each pension system; 1.75% for the regular KPERS system and 2.5% for the KPERS Police and Fire system.

A retiree covered by KP&F with 30 years of service and whose base pay averaged $58,000 over their three highest years of earnings would receive an annual pension of $43,500.  But if that person collected $50,000 in overtime each of their last three years, their pension would jump to $81,000 annually.  And over the first twenty years of retirement, the portion related to overtime costs taxpayers $750,000. 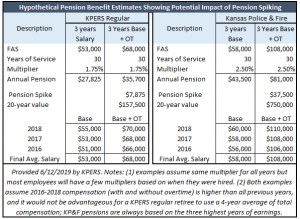 A retiree covered by the regular KPERS system with 30 years of service and whose base pay averaged $53,000 over their three highest years of earnings would receive an annual pension of $27,825.  But if that person collected $15,000 in overtime each of their last three years, their pension would be $35,700 annually.  And over the first twenty years of retirement, the portion related to overtime costs taxpayers $157,500.

Higher costs usually mean higher sales and property taxes. Sedgwick County property tax has increased 103% since 1997 according to data Kansas Policy Institute obtained from the Kansas Department of Revenue through open records requests.  That increase is 1.6 times the combined rates of inflation and population change over the period. 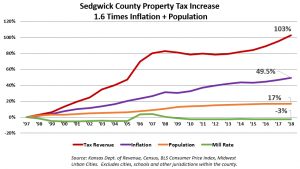 County employees provide valuable service to the people they serve. Reviews of employee compensation isn’t a criticism of them or the service they provide.  However, taxpayers also need to know how money is spent and the implications for potential tax increases. There is also valuable insight to be gained regarding the management of valuable human resources. Vast amounts of overtime can be symptoms of bigger problems within government, and something taxpayers and county employees deserve to have addressed. 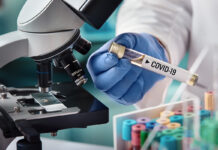