A race-based scoring system to determine who will get the relatively-scarce monoclonal antibody COVID treatments is found in some states, but The Sentinel has so far not found that to be the case in Kansas.

The Sentinel reached out to the University of Kansas Health Systems, Ascension, and to Community Health Centers of Southeast Kansas — one of the larger CHC systems in the state — to ask if preferences were being given based on race for antibody treatments and antiviral medications.

KU Med and CHC/SEK both emphatically said “no.”

“Every patient at The University of Kansas Health System receives the same level of care with no scoring of patients.” KU Med Media Relations Director Jill Chadwick said. “Patients receive care based on their individual needs.”

Chadwick also supplied the antibody therapy checklist used by KU Med, which requires that a patient first be 12 years of age or older, have a body weight over 88 lbs., have a confirmed COVID-19 with mild to moderate symptoms, be within 10 days of symptom onset, be without increased oxygen requirement from baseline due to COVID-19 and not have been hospitalized currently or within the past 90 days due to COVID-19.

If a patient meets all of those requirements, they must also meet at least one more criteria for increased risk.  Race, however, is mentioned nowhere in the checklist as it is in some states.

CHC/SEK — as a health clinic, not a hospital — does not give monoclonal antibody treatments but does provide vaccines and antiviral medications to patients who need them.

CHC/SEK Communications Director Robert Poole provided a “decision tree” document for the two antiviral drugs the clinic can provide and it is largely similar to the checklist provided by KU Med.

Ascension, a Catholic health ministry that owns hospitals across the country — including several in Kansas, did not respond to inquiries by press time.

Race-based scoring used in hospitals in other states

The Sentinel’s questions were prompted as the result of an investigation by the Wisconsin Institute for Law and Liberty, which found that SSM Health, a Catholic health system that operates 23 hospitals across Illinois, Missouri, Oklahoma, and Wisconsin began using a scoring system which gave race more weight that four of the largest risk factors for COVID-19 combined sometime in 2021 for antiviral drug Regeneron.

According to a story in the Washington Free Beacon, a patient must score at least 20 points to qualify for the drug. The rubric gives three points to patients with diabetes, one for obesity, one for asthma, and one for hypertension, for a total of six points. Identifying as “Non-White or Hispanic” race, on the other hand, nets a patient seven points, regardless of age or underlying conditions. 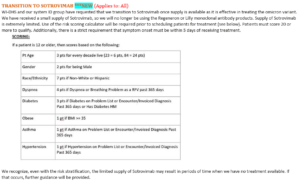 SSM, however, appeared to back down from the use of the scoring rubric quickly after WILL — a conservative, nonprofit legal organization — threatened a lawsuit over what they termed a “profoundly unethical … immoral,” and “illegal,” scoring system.

According to Dan Lennington, WILL’s deputy counsel, the group became aware of the practice when the scoring calculator was mistakenly included in a Dec. 30, 2021 email to system physicians which he said a whistleblower provided to his group.

On Jan. 14 of this year, WILL sent a letter to SSM Health demanding the practice end.

Within hours of the demand letter, SSM chose to discontinue the practice.

Lennington told the Sentinel in a phone interview earlier this week that SSM initially defended the scoring system.

“They start off with the premise that they think it’s appropriate, which makes me very concerned,” Lennington said. “Before we sent our letter, our [whistleblower] received no other contradictory emails from the administration. So the administration set this policy on December 30. They told doctors to distribute this based on race.”

Lennington said SSM quickly told him they had discontinued the policy, but noted “If they changed their position, (prior to WILL’s demand letter) it was an incredibly well kept secret, because the doctors who actually prescribed the medication never heard about it.”

To Lennington, it is quite clear what caused the backtracking.

“We believe it was our letter and the threat of litigation … that caused them to change their behavior,” he said, adding a lawsuit is still possible if a client was denied treatment because of their race.

He also noted that at the beginning of the pandemic there was some indication that race might play a factor.

“The original justification for this racial disparity was, at the beginning of the pandemic, there was some indication that infection rates and death rates were higher — disproportionately higher among racial minorities,” Lennington said.  “Whether that’s true or not, is up for debate because some scientists have gone back and looked at the studies and then controlled the statistics for diabetes, obesity and high blood pressure and age and all the disparities go away.”

Indeed a study posted on PLOS One, a peer-reviewed open access scientific journal published by the Public Library of Science since 2006, entitled “The impact of race and ethnicity on outcomes in 19,584 adults hospitalized with COVID-19,” found “Black patients with COVID-19 had a higher burden of comorbid illnesses. As a result, after adjusting for comorbidities racial differences in mortality were no longer statistically significant. In contrast, Hispanic adults had lower overall mortality than non-Hispanic adults, a finding that remained statistically significant even after accounting for demographic and clinical differences among those hospitalized.”

Lennington said his organization is receiving tips about monoclonal antibody discrimination from other whistleblowers as well.

“We got one (recently) that there’s a place called Stanford health,” he said. “Stanford Health is in South Dakota, North Dakota, and Minnesota. So we’re getting more tips.”