A “community survey” from the Pratt Chamber of Commerce raises a lot more questions than those in the survey.

An email obtained by the Sentinel from Pratt Area Chamber of Commerce Executive Director Kimberly DeClue included a link to a survey created as part of what the Colorado State University’s Prevention Research Center says was a collaboration with the Kansas Leadership Center.

However, KLC President and CEO Ed O’Malley said in a phone interview after the initial publication of this story that his organization is not in formal collaboration with CSU, and has no plans to use the study.

The questions on the online form are laid out in a format that does not allow for flexibility or nuance in answers, but rather asks takers to assess “never” to “always” on a numerical scale from 1 to 6, as well as other sections which request strongly disagree to strongly agree with statements such as “We have a process in place to make sure people with lived experience of racism and White people work together to influence systems change.”

It also includes sections such as “justice” with statements such as “Community members are committed to making amends for past injustices” and “The community works openly to address past racial issues and injustice.” 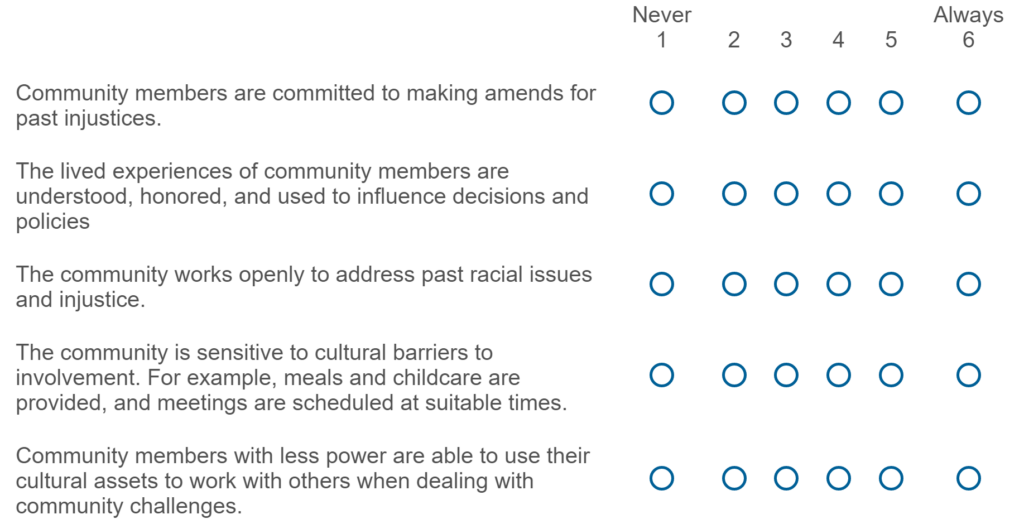 The entire survey is peppered with “social justice” and “critical theory” phrases and seems to presumes the existence of racism without supporting evidence of actual incidents.

The Sentinel wrote to DeClue at the Pratt Chamber of Commerce with a list of questions about the survey.

DeClue didn’t respond, but the Sentinel received a reply from Jeanette Siemens, who is a Pratt city commissioner and a “facilitator” for the KLC.

“Thanks for your interest in the Community Capacity Index Survey,” she wrote in an email. “We all are quite comfortable with and looking forward to the responses from our citizens and everyone working together for the future utilizing that information for planning and growth.”

Siemens didn’t say why she was dodging questions on behalf of the Pratt Chamber of Commerce.

The Sentinel reached out again, both to Siemens and DeClue, noting Siemens’ reply was non-responsive to our questions, and asking again for direct answers.

As of publication time, Siemens and DeClue had not replied.

According to the Colorado State University Prevention Research Center website, the survey is a collaboration “with the Kansas Leadership Center (and a panel of 32 other experts on community-driven change) on the development of a civic capacity index. This index will be used in needs assessments, as an outcome measure for various community-based interventions, and in basic research such as on community resilience. The project is funded by a one-year Colorado State University Extension Mini-Grant ($3000), the above CYFAR grant, and other resources.”

A CYFAR is a USDA Children, Youth, and Families at Risk grant, provided to universities such as Colorado State. The amount of the grant, what constitutes “other resources” and who is on the “panel of 32 other experts” is unclear.

The Sentinel will be following up with Colorado State University and the Pratt City Commission, as well as the Pratt Area Chamber Commerce, and the next story in this series will explore their involvement and a list of other Kansas communities or chambers of commerce being surveyed.  We will also ask why CSU cites collaboration with the Kansas Leadership Center, which is disputed by O’Malley.