A poll commissioned by the Kansas Chamber found that a majority of business leaders think the Kansas Supreme Court overstepped its authority on school funding. However, those polled are optimistic about the economy, though they worry about the quality of the state’s workforce.

The Chamber has conducted the poll of Kansas business leaders since 2004.

The Court ruled the state’s school financing formula unconstitutional and gave lawmakers an April deadline to craft a new one. A majority of business leaders polled, 65 percent, said the Court overstepped its authority by demanding more money for K-12 education.

“That is why the Kansas Chamber supports a constitutional amendment for the democratically elected legislature to have exclusive authority to determine funding for schools in an effort to eliminate endless litigation over school funding,” Alan Cobb,Kansas Chamber President and CEO, said in a press release. 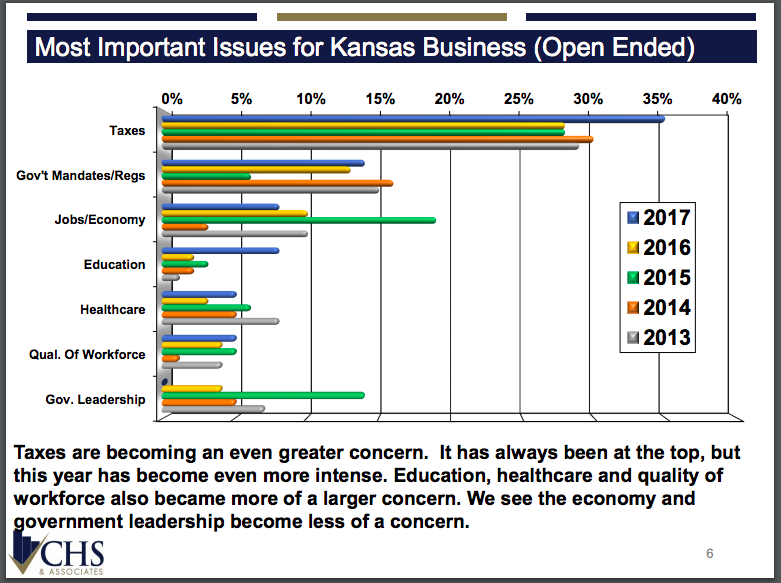 The primary purpose of the poll is to gauge business leaders’ concerns on the state’s economic and political climate. Business leaders are feeling more optimistic about the direction of the state, but taxes and a prepared work force are areas of concerns.

Of those polled, 45 percent of business leaders said lowering taxes on businesses is the most important challenge to profitability.

“Taxes are becoming an even greater concern,” said Pat McFerron, of Cole Hargrave Snodgrass and Associates, which conducted the poll. “It has always been at the top, but this year it has become an even more intense issue.”

The poll also revealed business leaders are concerned about the state’s workforce. Though they are optimistic about hiring people in this year, they have concerns about the quality of the workforce.

“Business leaders expressed growing concerns about potential employees passing drug tests, though this issue pales in comparison to the need for both soft and technical skills,” McFerron said.

A little more than half of respondents, 51 percent, said it is more important for the state to improve school performance and rigor than it is for the state to provide schools with more funding. However, almost three-fourths of respondents said they believe school funding is directed too often to school administration rather than student achievement, and 77 percent said Kansas needs to get more than 55 percent of education funding to the classrooms, as prescribed by state law.