A recent public meeting about the proposed Newton school bond issue left residents with several unanswered questions, including how student achievement would be impacted, the necessity of the spending proposals, and the real cost to taxpayers.

Voters in the USD 373 Newton school district are set to vote on two different school bond questions by September 3rd. Question one is a $61.3 million redesign of Newton High School, safety and security designs across the district and some new classrooms at two schools. The second question is a $24.4 million vote for construction of a new elementary school.

The total cost of the project including interest, however, is $137.9 million.  Financial information obtained from USD 373 through an Open Records request shows interest of $29.8 million will be paid on the first issue (assuming 3.5% interest paid over 20 years) and $22.4 million on the second issue (assuming 4% interest over 25 years).

No principal will be paid down for the second bond question until the bond for question one is paid off.  Matt Morford, the director of Business Services for USD 373, said of the interest-only payments, “Interest-only to keep mill rate down.  As a brand new elementary is a 50-75 year building, longer amortization is not unreasonable.  If Proposition 2 was done with ordinary amortization, the mill rate would have been higher in early years.”

District officials say the owner of a $100,000 house will pay about $126 annually to pay off both pieces of the Newton school bond, but the real cost to residents is arguably more than twice that amount.  USD 373 based the cost estimate on just the 10.94 additional mills of property tax, but residents are also paying 11.63 mills on a current bond issue; when those bonds are paid off in 2026, residents would pay 11.63 mills less without the new proposal. That would reduce taxes on a $100,000 home by $134 per year, making $260 the total cost of the bond proposals for $100,000 homeowners.  The cost would rise each year if the county increases the appraised valuation.

The school district is expecting to receive $37.2 million in additional state aid to pay off the bonds, and that would likely lead to higher taxes eventually for Newton residents and businesses as well as other parts of Kansas.

Tyner said that the communities Newton was competing with for students are “have done significantly more; some communities hundred of millions of dollars.”

Tyner pointed out the need to get attract and retain qualified teachers and how a bond would help that.

“We have a massive teacher shortage in the state which means also competing on a yearly basis for a very small number of available teachers. And what are things teachers, like me, look at? We look at what a community invests in its school,” said Tyner.

Data from the Department of Education, however, says the teacher shortage rate was just 1.8% last year, with 642 openings across 286 districts last fall; school districts employed over 35,000 teachers last year, which set a new record.

Tyner is advocating for Newton taxpayers to vote to pay more in property taxes to attract qualified teachers like himself. He serves on the Newton school board but teaches for the Wichita school district.

A key point in the bonds promotion is to effect classroom size to ultimately attract more students, families to the district, and better teachers. Erickson said that student enrollment in Newton has been on the decline.

“So I ask you is it a question of needing more space, or is it how we are utilizing the space that we have. Because the enrollment numbers show a steady decrease,” said Erickson.

Erickson asked why the district is not paying teachers more if attracting them is a core issue, instead of spending money on administrators.

Referencing Department of Education data from 1993 to 2019, Erickson said, “In the state of Kansas student enrollment went up 11%…teachers 16%, managers 40%, and other non-instructional 48%.  Here is the interesting thing about that, because if it is about teacher pay…if the managers and non-instructional personnel stayed at 11%, the same degree as a student, every teacher in the state of Kansas could have gotten a $13,000 a year raise,” said Erickson. “That not money that districts don’t have. They have the money. They chose to spend it on not giving teachers a raise.”

Student achievement not expected to improve

Tyner admitted that the bond money would not have any impact on classroom learning, saying, “this does not address curriculum.”

A national study of the impact bond projects might have on academic performance confirms Tyner’s admission, concluding, “The results show that, on average, capital expenditure financed by a passed bond does not have significantly effect on student achievement.” 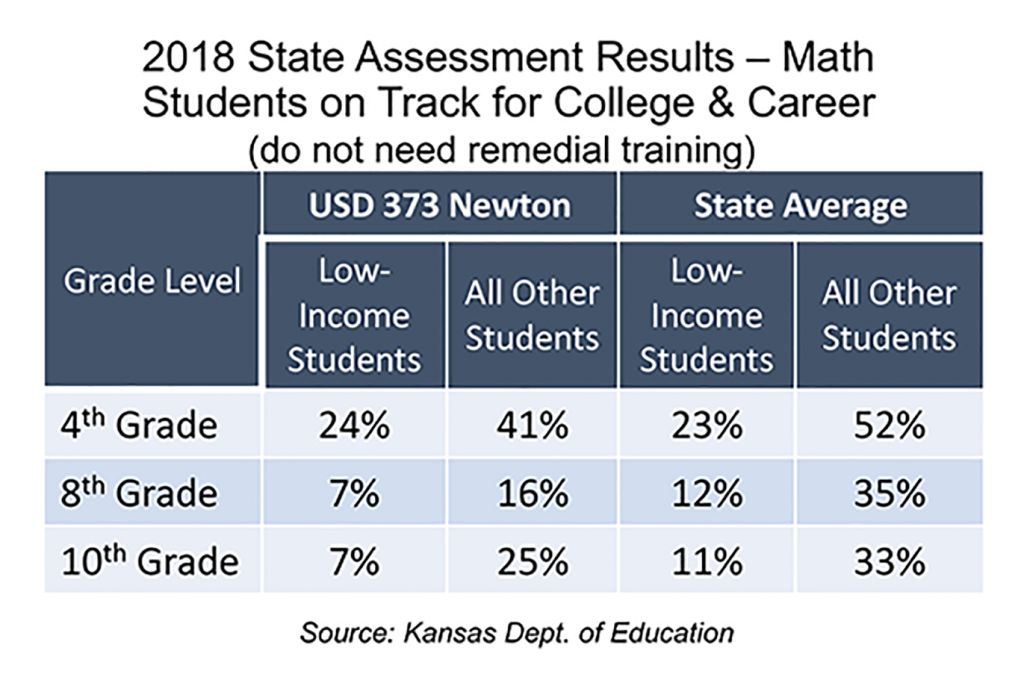 There is a need in the schools of up to code storm shelters and to build a new one for Newton High School. Newton Schools Superintendent Hamm said that the district has applied from federal grants to build storm shelters. There is no guarantee if the bond should pass that if the grants are received, the money would be used to pay down the bond debt.

Erickson said “All I have heard him say is we need nice buildings. I want to know how those buildings are to affect the success of our students.”

The school district is planning to hold multiple town halls regarding the bond all through the month of August. The ballots to vote on the bond issue will be mailed out August 14th. They must be received by the city no later noon on September 3rd.

JoCo in, Wyandotte out of shortened CDC quarantine guidelines

KSHSAA board members who voted for, against spectators disclosed