The U.S. Senate voted Tuesday to advance the massive $1.66 trillion omnibus spending bill to a floor debate, clearing the way for probable passage.

Senate Democrats, who control the chamber, needed 10 Republicans to vote for “cloture” and allow a floor debate on the bill. They got 21, including Kansas Senator Jerry Moran. 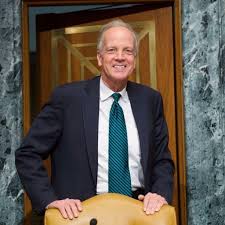 The Sentinel reached out to Moran’s office by phone to ask about his vote and was directed to leave a message for press secretary Angela Lingg.

Lingg responded via email, noting the Senate has not voted on the final passage of the bill, and said, “We will send out a statement from Sen. Moran after the final vote.”

Lingg did not, however, address the senator’s decision to support cloture and allow debate.

If passed, the omnibus bill would earmark funds for a number of progressive causes, including $575 million for “family planning/reproductive health” in areas where “population growth threatens biodiversity or endangered species.

However, one of the biggest issues facing countries worldwide is not “overpopulation” but rather declining birth and fertility rates and a rapidly aging population. As even the United Nations notes: “At the global level, population decline is driven by low and falling fertility levels. In 2019, more than 40 percent of the world population lived in countries that were at or below the replacement rate of 2.1 children per woman; in 2021, this share climbed to 60 percent.”

The more than 4,000-page bill includes — according to tweets from the Heritage Foundation — a raft of windfalls for various progressive organizations.

If passed as written, the bill would end the budget cap for two years and waive $130 billion in PAYGO budget caps, raising the actual price tag to more than $1.8 billion.

The 2010 Pay-As-You-Go Act requires that all new legislation changing taxes, fees, or mandatory expenditures, taken together, must not increase projected deficits.  This requirement is enforced by the threat of automatic across-the-board cuts in selected mandatory programs in the event that legislation taken as a whole does not meet the PAYGO standard established by the law.  PAYGO also established special scorecards and scorekeeping rules.

The bill also includes $47 billion in aid to Ukraine.