Gov. Laura Kelly’s FY 2022 budget proposal appears to be dead on arrival at the Kansas Legislature. Her record-setting $8 billion General Fund budget increases spending by about $254 million (not counting the ‘savings’ she assumes from reamortizing pension debt) and is $1.5 billion more than was spent the year before she was elected. In a press conference on Tuesday, Kelly called her budget draft, “sound.” 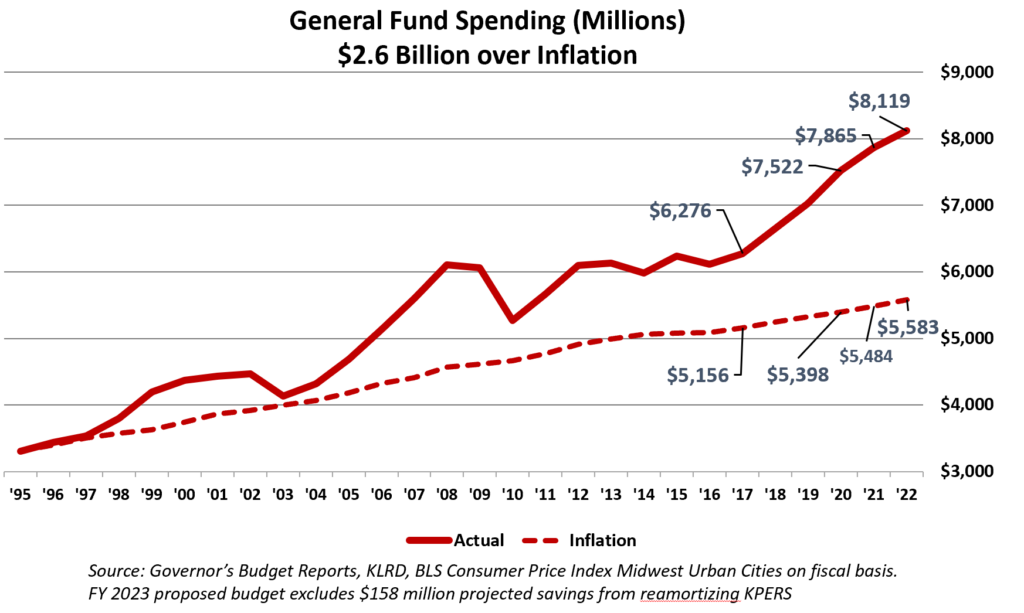 “This fiscally responsible budget protects the critical resources, services, and programs Kansas communities and businesses need to recover and emerge from this pandemic stronger than ever,” she said in a press release.

Kelly’s proposal would put spending $2.6 billion higher than if increased for inflation since 1995.

The proposal includes $244 million in additional funding for schools, $19 million for Medicaid expansion (far less than the projected real annual cost), a $27 million increase for the court system, and $14 million for a 2.5% pay raises for state employees.

In addition to the tax increases, Kelly’s budget approach uses what Republican leaders call “gimmicks” to pay for new spending.

“Republicans defeated each of Governor Kelly’s costly budgeting gimmicks last session and Kansas voters showed their support by sending even strong conservative Republican majorities to Topeka,” said House Majority Leader Dan Hawkins. “Kansans distrust Governor Kelly when it comes to their hard-earned dollars and the House and Senate have a mandate to hold the line against these expensive and irresponsible plans.”

The Kelly budget proposal refinances Kansas pension debt, adding 10 years to the state’s anticipated pay-off of Kansas Public Employees Retirement System (KPERS) liability from 2036 to 2046. The initiative would save the state $159 million this year but would increase pension costs by more than $4 billion over the long term. Lawmakers swiftly rejected the same proposal in last year’s budget.

Former Gov. Brownback proposed gimmicks like delaying KPERS funding and transferring money from the highway fund, and those recommendations drew ire from Republicans and Democrats. Like Brownback’s budget proposals, Kelly’s plan relies on transfers from the State Highway Fund and other gimmicks.

“When Governor Kelly was in the Senate, she and other Democrats roundly criticized Governor Brownback for doing some of the things she’s proposing, like taking money from the ‘Bank of KDOT’ and not properly funding KPERS. Now, she’s doing it herself” said Dave Trabert, Kansas Policy Institute CEO. (KPI owns the Sentinel.)

“Governor Kelly claims to be a fiscal conservative who talks like a budget hawk, but her budget relies on smoke and mirrors. She claims it doesn’t increase income or business taxes, but imposes higher taxes on Netflix and other digital media,” a joint statement from Kansas Senate Republican leadership reads.

“While the fiscal situation presented by the pandemic is challenging, we must pass a responsible budget that does not rely on gimmicks and games, but instead is fiscally sound and fair to all Kansans,” the statement concludes.