The Kansas Association of School Boards (KASB), the taxpayer-funded lobbying arm of local school boards, this week renewed their opposition to at-risk students getting better educational opportunities.  Last week, they opposed opening the tax credit scholarship program to more low-income and working-class kids.  This week, they attacked education savings accounts (ESAs) for students identified by districts as academically or financially at-risk, and also for students in schools that are not offering full-time, in-person learning.

As demonstrated in Part 1 and Part 2 of this series, the opposition is rooted in institutional interests (financial and otherwise) rather than what is best for students, and local school boards aren’t afraid to shade the truth to protect their turf.

KASB objections and ‘the rest of the story’

‘Fear’ of a two-tied school system – KASB expressed a fear that private schools would be selective in choosing students and leaving the “more challenging and expensive students in public schools.  Raising a fear that something might happen is a standard lobbying tactic, but if the circumstance actually occurred, they would say ‘look what it did.’  Many states have had school choice programs for a long time and their ‘fears’ have not occurred.  There is a ‘tiered’ system in Kansas, however – there are enormous achievement gaps between low-income students and their more affluent peers.  Districts received large funding increases targeted to close those gaps, but legislators didn’t require that the money be spent for the exclusive benefit of low-income kids, so districts spent it however they wanted. There are also tiers between inner-city and rural districts compared to the leafy suburbs with higher home prices.

Less money for public schools – there would be a little less money in terms of total dollars but schools would still receive the same dollars per-student; they would also have some cost reductions.  And let’s not forget that schools opened this year with nearly $1 billion in carryover cash reserves – most of which represents state and local tax dollars that school boards didn’t spend. Let’s also not forget that the resident district would get some extra funding for the three years after a student leaves with an ESA.

The KASB claim that Kansas kids perform better than most of the states with money-follow-the-child programs is mostly flimflammery.  Some of their comparisons don’t measure actual achievement (isn’t actual college or career readiness more important than a grade-inflated graduation rate?).  They also play some demographic games and lower the achievement bar to ‘basic’ instead of ‘proficient.’ 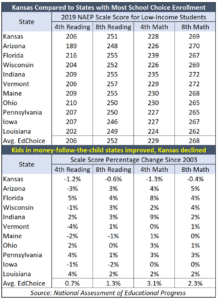 KASB compared Kansas to the 10 states identified by EdChoice (formerly the Friedman Foundation for Educational Choice) as having the most students enrolled in money-follow-the-child programs.  Several of those states have better outcomes for low-income students on the 2019 results from the National Assessment of Educational Progress (NAEP) but the real story is how those states have fared over time.

Florida, the state that truly transformed public education with choice, transparency, and accountability, had the largest gains.  Our documentary, Giving Kids a Fighting Chance, tells the Florida story from the perspective of former Governor Jeb Bush, the head of the Miami Urban League, and a host of educators.

With one exception, each of the states with the most kids taking advantage of money-follow-the-child opportunities saw net gains in learning across the four measurement areas.

Without competition, Kansas kids are stuck in underperforming schools that have a long history of relatively low and stagnant student achievement.

The table below shows the stark differences between the parochial and public schools on the Kansas state assessments in Wichita, Kansas City, Dodge City, Salina, and Topeka. Students of each diocese (plus Topeka Lutheran) not only score much higher than their public-school counterparts, but each group also exceeds the state averages in both math and English language arts (ELA). 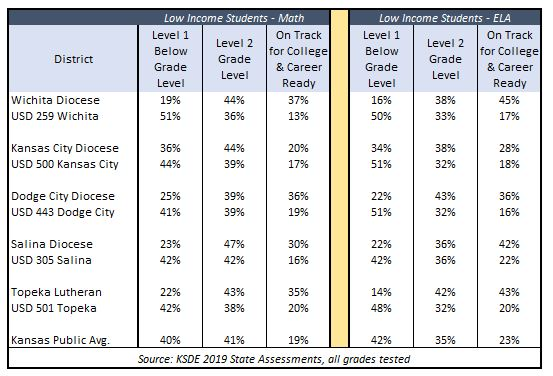 Joy Eakins, a former Wichita School District Board member, testified in favor of HB 2119 on Monday.  She explained why she now supports money-follow-the-child programs.

“In 2013, I staunchly opposed measures like this bill,” Joy Eakins, a former Wichita School District board member told the committee on Monday. “I believed we could bring change from the inside and fix these issues for our most vulnerable students. But now I’m here today asking you to pass this bill because I got a good look at the inside of the system.”

The education lobby continually promises that things will get better when taxpayers dump even more money into the system, but if anything, achievement gaps for low-income kids are getting worse.

Legislators have to decide whether to give Kansas students a fighting chance with money-follow-the-child programs or side with the unions, administrators, and other institutional interests.