In the wake of the Robb Elementary School shooting in Uvalde, Texas, the Texas Legislature issued a damning report which found “systemic failures” across both the police response and the culture within the school itself. 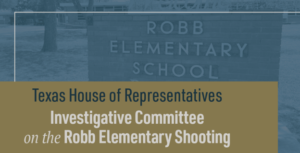 The report was careful to point out it found no “villains” among either school leaders or the police but stated: “There is no one to whom we can attribute malice or ill motives. Instead, we found systemic failures and egregiously poor decision making.”

In addition to the failures of the police, the Uvalde report notes a “regrettable culture of noncompliance by school personnel who frequently propped doors open and deliberately circumvented locks. At a minimum, school administrators and school district police tacitly condoned this behavior as they were aware of these unsafe practices and did not treat them as serious infractions requiring immediate correction. In fact, the school actually suggested circumventing the locks as a solution for the convenience of substitute teachers and others who lacked their own keys.”

Late last month — with the new school year looming — the Sentinel reached out to the superintendents of 15 districts, large and small, across the state to ask if they had read the report and if they were incorporating the lessons learned into their security plans.

Only four responded, and two of them dodged the questions.

Only two of those that responded, Salina and Manhattan-Ogden, addressed the Sentinel’s questions directly.  Goddard directed us to the chief of the district police department. Wichita said the district’s director of safety services would provide an interview, but that never materialized.

The Sentinel asked the districts if their leadership teams and boards of education had been provided with a copy of the report, if their personnel were up to date on active shooter training and if safety equipment such as locks were in good repair and routinely tested.

The Texas report on the Uvalde shooting found that wifi and cell reception were poor within the building and that the school’s security fence was simply too low, at five feet, to be an effective barrier. The districts were also asked about those concerns.

Salina Superintendent of Schools Linn Exline said her district “uses a variety of practices and procedures to promote the safety of students and staff.”

Among those, she said, is having building-level leadership routinely review crisis procedures, and use “tabletop drills” to assess responses to various crisis scenarios, and that maintenance is prioritized.

“We have processes in place to report facility issues, so they are promptly addressed,” she said. “Safety issues in our facilities are prioritized over other needs.”

Wade said both his leadership team and the board of education had been provided a copy of the report, and the Riley County Police Department would be attending staff meetings prior to the start of the school year to discuss any security concerns.

Additionally, every USD 383 school will participate in a School Safety Week sometime during the fall semester, and they just finished a three-day Active Violence Drill with area first responders.

His district, he said, is also taking physical barriers seriously and making sure connectivity is available.

“All of our early learning and elementary schools have fencing around the playground area. All of our schools and district buildings are on automatic exterior locks. We are also installing stickers that are placed on the interior side of an exterior door that remind people to never open the door and to never prop open a door.”