Shawnee Mission Superintendent Mike Fulton says shifting funding from capital outlay to operating expense and passing a bond issue is the only way to pay for more teachers, but district financials reports indicate that that’s a false premise.  Kansas Policy Institute and Sentinel CEO Dave Trabert says the district has multiple opportunities to save millions if the board is willing to shift priorities to improving student achievement.

The Shawnee Mission School District will ask voters to approve a $264 million bond issue in late January. District officials say the property tax increase helps lighten the load for teachers, as a portion of the proceeds will free up money in other budgets that can be used to hire new teachers.

The bond request comes on the heels of contentious contract negotiations between the teachers union and the school officials. During 2019 contract talks, teachers demanded dropping their scheduled instruction periods from six classes per day to five. Doing so would require hiring more teachers, and the proposed bond initiative would allow district officials to shift money from one budget — capital outlay — to another, the operating budget. The board of education agreed to put the bond issue before voters during an Oct. 26 meeting.

Maintenance costs can be paid out of the capital outlay fund and the district’s proposal would shift custodian pay from operating expenses to capital outlay, freeing up operating budget money for new teachers. Meanwhile, the district would use the remainder of the bond funding to renovate and upgrade district buildings.

Fulton effectively told board members and taxpayers that the district has no opportunities to save money and reprioritize current spending to hire more teachers.

“We can’t do that unless we pass a bond issue,” Fulton said last October when the board passed the bond initiative.

Trabert says that’s a false choice. There are several other ways district officials could reduce teacher workload or add staff without asking taxpayers for more money.

“SMSD could reduce teacher workload by making better use of existing resources rather than impose higher property taxes with more debt,” he said.

For instance, Trabert noted that the nearby De Soto School District spent $734 per student on administration last year, but Shawnee Mission spent $1,111 per student. Reducing administration overhead to De Soto’s level would save over $10 million per year. 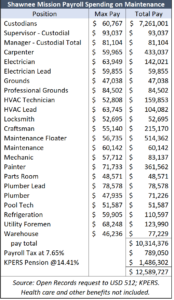 District officials could also save money by outsourcing some of functions it does in-house, like maintenance and food service.

USD 512 spent more than $12 million on maintenance payroll during the last school year; that includes the cost of payroll tax and pension funding but not health care and other benefits.  The Custodial Supervisor was paid over $93,000 and the Custodiaal Manager was paid $81,104.  The highest paid custodian was paid almost $61,000.

A painter earned almost $72,000 and the district has an in-house locksmith who was paid nearly $53,000.  For perspective, the average Shawnee Mission teacher was paid $62,453 according to district records.

Trabert says the district lost $1.5 million on food service last year and they are budgeting a $2 million loss this year that he believes could be avoided.

“They could raise prices a few cents per meal for adults and reduce food costs by combining purchasing power with other districts.  Former superintendent Jim Hinson asked other Johnson County districts to reduce costs by collaborating to provide non-instruction functions, but no one else was interested.”

Right-sizing staff is another huge opportunity.  Between the 2016 and 2020 school years, Shawnee Mission enrollment increased by just 1.9%; teacher employment increased by 4.8%, while administrators and other non-teaching positions jumped over 15%. There were 17.7 students per classroom teacher last year according to the Kansas Department of Education; there were 18.2 students per classroom teacher in 2016.

The exorbitant spending has some taxpayers asking whether they’re getting their money’s worth.

Property tax increase would be harmful

The district says the bond proposal would increase the district mill levy rate from 52.115 mills to about 52.823. They say it will only cost the typical homeowner about $25 per year but it will businesses a lot more.  Trabert explains how the true cost could be even more.

“Johnson County typically raises assessed values more than twice the rate of inflation, so the cost of the mill increase could go up about 5% each year.  There could also be a hidden cost if any existing debt is set to expire in the next few years, which would reduce associated property taxes unless more debt is incurred.  Like most districts, however, Shawnee Mission doesn’t publish their debt service schedule on their website so we say what that the potential property tax reduction could be in the future if this bond issue fails.”

This isn’t the only property tax increase that will hit taxpayers.

“The last thing parents and businesses need now is another property tax increase,” says Trabert. “Overland Park and Johnson County are each budgeting about 5% increases. Property taxes are chasing some people out of their homes all across the state, and that includes Johnson County.”

Since 1997, just the property tax collected for county operations – excluding library and parks – jumped 264%.  That 2.7 times greater than inflation and population combined. 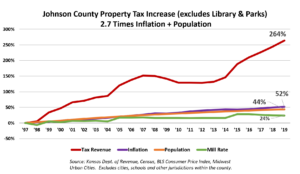 Commercial properties are taxed at higher rates, so the bond hits business owners harder than homeowners.

Taxpayers wonder what they are getting for their money

The district received a $9.8 million boost in funding following a Kansas Supreme Court decision in 2019 that required the state to inject nearly a billion more into public schools. Despite the influx of cash from the state, the district only provided teachers with a 1%  salary increase. 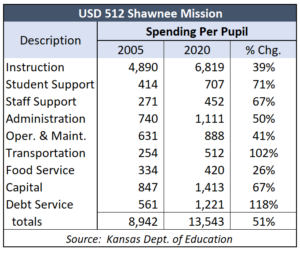 The district spent $6,819 per student on Instruction, which was just 50% of total spending.

Taxpayers are frustrated that the district wants to dip into their pockets to break the impasse between the union and the teachers. 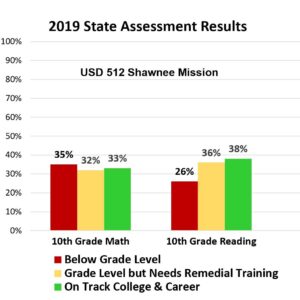 “My neighbors and I paid the SMSD $230 million just 5 years ago. Now we’re being asked for an additional $260 million. A half-a-billion dollars in 6 years strikes me as unreasonable,” Bauer said.