The Kansas National Education Association won’t comment on a Harvard University study that shows student achievement declined with remote learning during the pandemic, with minority students suffering the greatest learning loss, despite claims by large teacher unions a return to classroom instruction was “racist.”

Thomas Kane, professor of education at Harvard, and one of the study’s authors summarized the findings:

”Where schools shifted to remote learning, gaps widened sharply. Over the last 30 years, there has been a gradual closing in both the Black-White and Hispanic-White achievement gaps. The latest assessment was conducted between January and March of 2022. Our results imply that when those results come out later this year… there will be a decline nationally, especially in states where schools remained remote, and gaps will widen sharply for the first time in a generation.”

The Sentinel reached out to the KNEA for reaction to this study, but none was provided. Just over a year ago, the union provided written testimony in opposition to Senate Bill 235 requiring school districts to provide an in-person attendance option for students. KNEA preferred that mandates come from local school boards. The bill passed the Senate but died in the House. 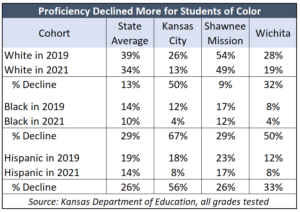 The falloff was even worse in some districts that were notorious for keeping kids out of classrooms.  White students in Shawnee Mission, for example, fell by 9% but Black students dropped by 29% and Hispanic students fell by 26%.

“Shifting to remote instruction was like turning a switch on a critical piece of our social infrastructure that we had taken for granted.”