The Kansas Department of Revenue (KDOR) sent a memo to a few legislative leaders in a thinly-veiled effort to give Governor Laura Kelly cover to veto tax relief in Senate Bill 50.  The March 30 memo from Revenue Secretary Mark Burghart and Budget Director Adam Proffitt said KDOR estimates “there will be a $359.9 million reduction in state revenue” from business being able to deduct expenses covered by PPP loans.  But KDOR has so far declined to provide calculations to substantiate the claim, and the Kansas Chamber of Commerce tells legislators that KDOR’s logic runs counter to established tax practices.

Congress confirmed in December that businesses that received loans under the Paycheck Protection Program would be able to deduct expenses paid with those loans. A November 19 joint press release from Senate Finance Committee Chairman Chuck Grassley (R-Iowa) and Ranking Member Ron Wyden (D-Ore.) reiterated that Congress always intended for expenses paid with PPP loan proceeds would be deductible.  Congressional action in December was intended to overrule IRS and U.S. Treasury guidance issued on November 18, saying they wouldn’t allow those expenses to be deducted.

KDOR claims to have considered those expenses non-deductible in the November Consensus Revenue Estimate, issued on November 6, and that state tax revenue will be about $360 million less as a result of Congressional action in December. But there is nothing in the November revenue estimate report referencing what would have been a material change from the April estimates.

In a letter to legislators, the Kansas Chamber said that payroll and other expenses have always been deductible.

“Those expenses have always been deductible. With or without PPP loans, they would be deducted on a business’ tax return. The issue that arose was a ruling by the IRS after the passage of the CARES Act that those specific expenses related to the PPP could NOT be deducted. This effectively taxes PPP loans as income. But PPP loans were not income. They were forgivable loans (subject to spending those funds on the qualified expenses) and not subject to tax in the eyes of Congress. Since Congress felt it was not their intent when passing the PPP program, they further clarified in the second relief package that these business-related expenses were deductible, fixing the problem.”

For revenue estimates to be reduced now because of PPP expenses being deductible, it seems that KDOR would have increased revenue estimates in November to account for the change, as those expenses would have been ‘baked in’ to the April 2020 estimate. But there is no mention of non-deductibility of PPP expenses creating a $360 million revenue increase in the long-form November report from Kansas Legislative Research Department dated November 25.

Legislators and taxpayers deserve to see that KDOR increase revenue estimates by $360 million in order to justify reducing the estimate now. But no such explanation was provided, and mainstream media apparently didn’t ask the question.

The Sentinel did so on April 7 in an Open Records request, seeking a copy of the memo, the calculations from the November CRE showing the referenced expenses were assumed to be non-deductible, and the calculations underlying the March 30 letter to legislators.

As of April 14, nothing has been produced.

A large portion of the nearly $100 million in annual tax relief in SB 50 comes from what has been described as a ‘found wallet.’  The 2017 Congressional tax relief bill reduced federal taxes but the changes cause some people and businesses to pay more state tax.  The higher standard federal deduction prompted people to use that instead of itemizing deductions, but that prevented them from itemizing for state purposes.  Senate President Ty Masterson and others say it’s like the State of Kansas found a wallet with taxpayers’ money on the sidewalk and kept it; now the Legislature wants to return the money to the rightful owners.

Governor Kelly wants to keep taxpayers’ money so she can continue the rapid increase in spending, but she needs political cover to make it sound like she’s being financially prudent.  So two of her cabinet secretaries conveniently gave her that cover just days before many expect her to veto SB 50. 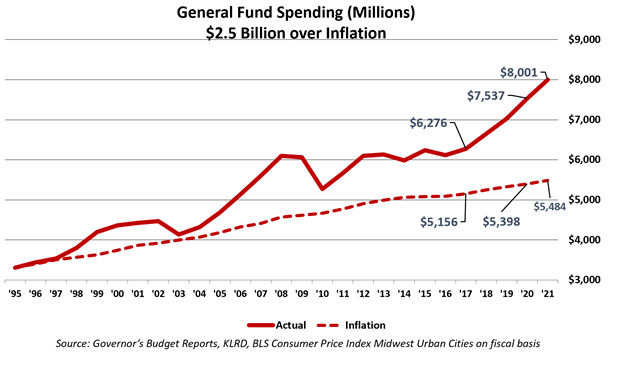 This story will be updated if KDOR produces the requested calculations through our Open Records request.