In a statement to The Sentinel, Alan Cobb with the Kansas Chamber says the Star is wrong when it comes to business.

“Unfortunately the paper’s reasoning for why Kansas cannot afford to reduce that burden on Kansas taxpayers because Kansas businesses do not pay their fair share of taxes is wrong,” said Cobb.

The Star’s motivation for criticizing corporate tax rates is at least partly driven by its desire for higher spending, writing, “If Kansas doesn’t have sufficient funds for schools, roads, and health care, it’s because corporations aren’t paying their fair share — not because consumers and wage earners are paying too little.”   The editorial neglected to mention that both individual and corporate tax collections jumped more than 11% for the year ended June 30, 2019, due mostly to state tax increases.  The Star also fails to acknowledge that tax increases have been outstripped by spending increases.

“State tax collections rose 35 percent in real terms between 2000 and 2017, but state spending grew almost twice as fast, increasing 69 percent. These numbers do not include the billion-dollar tax and spending increases of the last two years,” said Cobb.

Spending growth since 2017 is even worse.  A new projection from Kansas Legislative Research shows spending is expected to hit $8.3 billion by FY 2023; that’s $2 billion more than was spent in 2017 and represents a 32% increase.  Inflation over the period was just 10.7%. 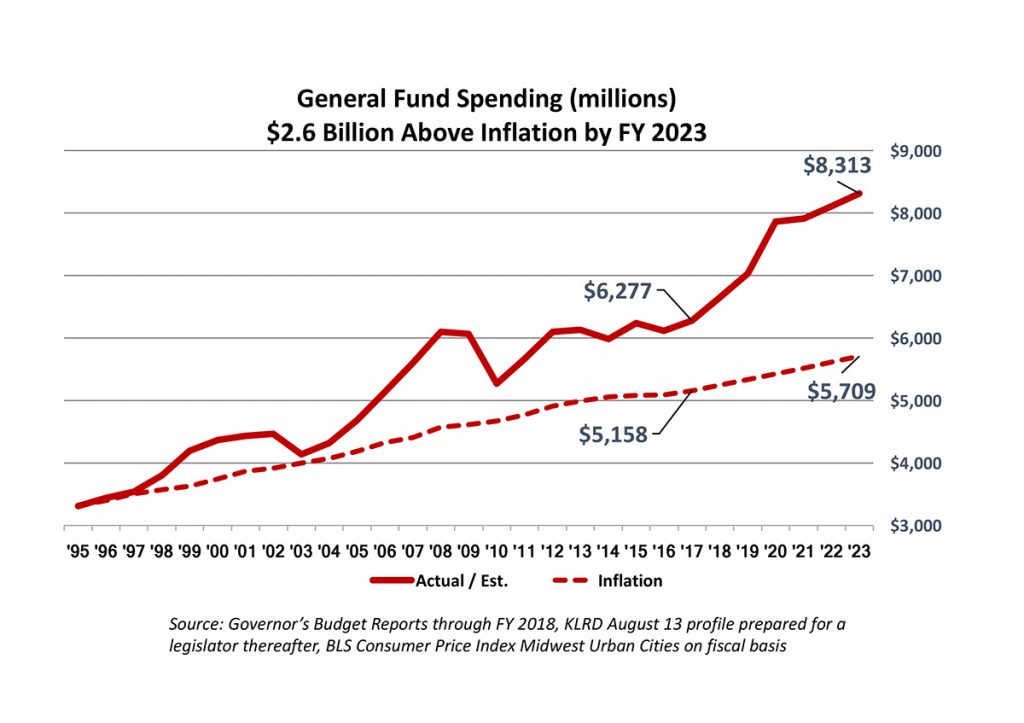 Given the Kelly administration’s desire to reform the tax code, Cobb is bracing for more taxes. “Unfortunately based on the leadership and membership of Governor Kelly’s tax reform council, Kansans should expect recommendations to increase the tax burden on Kansas families and businesses so the governor and her administration can spend more,” said Cobb.

The Kansas Chamber is in the middle of a study with the Tax Foundation to be released in December, which endeavors to provide real tax relief.

“This study will lay out why Kansas struggles to grow and recommend a variety of ways we can reduce the tax burden while still provide essential services and programs,” says Cobb.