The Missouri Legislature put student needs first in passing the state’s first school choice program, and parents are thrilled.  People who donate to the program get a 100% state tax credit for their generosity, and the money provides scholarships to low-income students and those with disabilities in cities with at least 30,000 residents.

So naturally, the Kansas City Star and education officials are angry that the most vulnerable students get a better educational opportunity because money for government institutions is more important to them.  And they don’t the truth get in the way.

The headline declares that the program “will hurt public education,” equating harm with money, as students taking advantage of choice programs take part of their funding with them.  But that claim isn’t about ‘public education,’ it’s about the government institution. The Star’s belief that government institutions take priority over students is a common theme throughout this and every other editorial the editorial board writes.

A tax credit scholarship for the neediest students is new to Missouri, but school choice programs have existed across most of the nation for about two decades and there isn’t a shred of evidence showing that students suffered in states with school choice.  If such evidence existed, those who place their priority on institutions instead of students’ needs would show the proof instead of speculating that choice will harm students.

The Star spreads fear of harm because the states with the most robust school choice programs show strong gains in student achievement; in other words, the truth undermines their opposition to school choice. 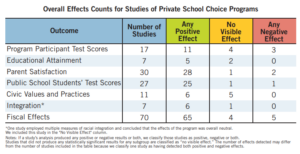 The positive impact on achievement is impressive.

Following the pioneering leads of Arizona and Florida, a recent Wall Street Journal editorial last week congratulated Indiana “for its leadership in establishing one of America’s most ambitious school voucher programs.”  Indiana legislators are giving students a fighting chance, expanding school choice eligibility from 37,000 to 48,000 students, and the results in these states are remarkable.

In another baseless claim, the Star editorial board says low-income students are “less likely to be welcome in private and charter schools.”  And once again, they provide no documentation…because the facts refute their claim.

A recent survey from the American Federation for Children found that 65% of K-12 parents back school choice.  The survey also found 74% support among African Americans and 71% support among Latinos.

People support school choice because they know it works for those who take advantage as well as those who don’t.

It’s all about the money

Education officials and their media allies oppose choice because, for them, it’s all about money.  Opponents, aka supporters of the status quo, talk exclusively about funding loss from kids leaving for a better opportunity and the impact on the institution.

The Star editorial served up several quotes on that theme.

Begins?  Only 24% of Missouri high school graduates who took the ACT were considered college-ready in English, Reading, Math, and Science.  Indeed, the degradation of public education over the last few decades is the reason so many parents want better opportunities for their children.

We don’t have data on Missouri school spending, but if it is anything like Kansas, there is probably a lot of spending that could be put to better use.  For example, 838 Kansas education officials were paid more than $100,000 in the 2020 school year.  And with an 8% increase in enrollment over the last 15 years, Kansas school districts added 16% more managers, and all the other employees who don’t teach jumped by 19%.

That the Star and education administrators care more about government institutions than the educational best interests of students is not news.  But we still have to point out their hypocrisy and deception – because that is in students’ best educational interest. 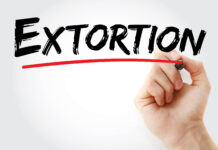 Blue Valley ransom note to parents: pay up or else